I knew virtually nothing about Africa until I read this book. King Solomon’s Mines, a handful of novels and a hair-raising account of Stanley’s search for Livingstone were about it–that, and the stories that regularly appear in the news about troubled dictatorships, elephant poaching and genocide. If you want to know something about what Africa is like, not the Africa of the headlines but the on-the-ground place, Dark Star Safari is the book to read. It’s an account of the trip Paul Theroux made by bus, car, van, truck, train, and canoe from Cairo to Cape Town.

Probably America’s best-known travel writer, Theroux has matured quite a bit since The Great Railway Bazaar and The Old Patagonian Express, but he’s still the same slightly grumpy adventurer with a nose for interesting places and the cojones to get himself there.  By the time of this adventure, in 2001, he’s about to turn sixty and wants to prove to himself and anybody who’s watching that he’s still got what it takes. And he does. You get to see what’s going on in the dark and dangerous places he visits without getting so much as a mosquito bite. 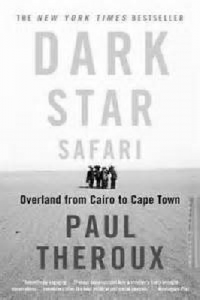 When Theroux was a young man, he’d come to Africa to work in the Peace Corps. Then he found himself a position teaching English at Makerere University in Kampala, Uganda, in order to support himself while he pursued his career as a novelist. In an earlier book, Sir Vidia’s Shadow, he recalls with pleasure the simple concrete house he lived in, the sounds of his neighbors down the hill, cooking, washing, the children playing. He liked his job.  At the time, many African countries had recently achieved independence. People were flocking to the cities; new businesses, new institutions, new forms of government were coming into being. Aid was pouring in. There was an atmosphere of hope and aspiration. Theroux had fond memories. What he finds upon his return is devastating.

While my images of Africa consist primarily of jungle and bush—scenes from comic books, movies, and advertisements for safaris–the Africa Theroux visits is largely urban. It isn’t until close to the end that the overall picture he offers comes into focus, and a good thing, too, or we might not be able to stay the course. What the book will reveal dawns slowly. And the book itself begins slowly, too.

He starts in Al-Qahirah, Cairo, “the Victorious,” in Egypt, Umm El Donnya,    “Mother of the World”—“a city of bad air and hideous traffic, . . . made habitable, even pleasant, by its genial populace and its big placid river.” On horseback he visits the Sphinx in Giza—one of the most memorable moments in his life as a traveller—and takes a boat to the Upper Nile to see the pyramids in the Valley of the Kings. But most of his time is spent hanging around the Sudanese embassy waiting for a visa. When it comes, he flies to Khartoum, because the border is closed, “a place without rain, wide and brown, like its intersecting rivers.” His eyes are dazzled by the sun reflecting off white-washed buildings. “There was no shade, except the slanting shadows of the Sudanese . . . their ghostliness. . . made emphatic by their shrouds and cloaks.” In the countryside, the civil war that Theroux had heard about forty years ago from refugees in Uganda is still going on. He is warned not to venture out of the city.

There is something desultory about Theroux’s accounts of these places at the outset of his journey; he makes a mosaic out of bits of history, odd pieces of information, chance encounters, sights and smells. It is not until he gets to Ethiopia and the almost medieval city of Harar, where hyenas roam the streets at night, that the narrative picks up pace and intensity. And then you just don’t want to stop reading, even though the book is close to 500 pages long.

Even if I could, I wouldn’t take you through the cities he visits–it would spoil your experience should you read the book. But the cumulative effect is one of overwhelming suffering. The forty-year civil war in the Sudan is only the opening note in a symphony of woe. The thousand after-effects of colonialism, government corruption that includes everything from political chicanery to massacre, mismanagement, drought, economic disasters, the corrosive effects of foreign aid, war, the AIDs epidemic—about the only thing that hasn’t happened to Africa is nuclear holocaust. Theroux takes us into the streets and shops, the eating places, the private homes, the shanties, the schools, the government buildings, the workplaces, the bus stations and shows us how people live. We hear the voices of the beggars, smell the shit in the streets, see the buildings falling to ruin. The experiences he recounts are detailed, vivid. Though he doesn’t seem to be laboring or straining—the tone is relaxed and comfortable–it’s a titanic effort, both of exploration and of testimony. A major achievement.

Yet, the more I thought about it, for me, there was something missing. I am grateful to Theroux for what he has given us. So when I point out what he has not done, it’s not to fault his book, or to suggest that it should have been different, but rather to name something for myself. What’s missing here is a concerted attempt to see Africa from the point of view of people who live there. With the exception of a few educated people he meets along the way or has had previous contact with, Theroux does not spend time living with the Africans he writes about—the poor people, the ones who populate the shanty towns that surround every major city except Cape Town, where the area of extreme poverty is more confined. And though he suggests that subsistence farming may be the best solution to Africa’s economic crisis, he visits no villages where that is the way of life. He talks to nuns and social workers, he talks to government officials, diplomats, teachers, landowners, and the occasional shopkeeper. He doesn’t talk to the urban poor whose suffering he depicts from the outside. He doesn’t visit their homes. And most important, he doesn’t record any moments of happiness in their lives. I do not believe that people can live without happiness or joy of any kind. Even if it’s only experienced when they’re drunk or high. But there are no instances I can remember when Theroux shows Africans having a good time—other than when they are beating a criminal to death for having been caught stealing.

The only thing I’ve ever loved about Africa is the singing. I’ve experienced it only a few times in my life, but when I have, it has lifted my heart and stirred my soul. I’m speaking of songs like those sung by the group Ladysmith Black Mombasa.  In Dark Star Safari there is no singing. Perhaps Theroux felt the terrible reality he chronicles would have been softened or dissipated, and thereby dishonored, had he presented other aspects of African existence—a legitimate reason for the omission. Or perhaps he just didn’t see any other side—though I doubt it; he’s too observant and too sensitive. It doesn’t matter. Among other things, reading his book has made me curious to know something about the other side. Anybody who has ever listened to American spirituals knows that there is one. ~