To those in Andes for whom it hasn’t yet sunk in that Cory Ackerly owns and operates a Delhi restaurant I recommend you visit it soon. Not just to support him and Brianne, whose Andes café, Woody’s, you are probably already a fan of,  but also because there is much to enjoy in its family-friendly atmosphere, including the latest Healthy Options Menu.

Cory took on the ownership of 106 Main Street, Delhi (where the Olde Caledonia among other businesses once resided) 2 ½ years ago. He recognized there was an unfilled niche for an eatery that would cater to youth as well as adults and families. And he saw that operating a pizzeria restaurant was a good fit for himself. He had been throwing crust and making pizza since he was a 15-year old high school student in Delhi, and later had his own restaurant in the south. The 3,600 sq. foot space – about 2,000 sq. ft. for the dining area – allows for a restaurant section with booths and art on the walls, and another huge section for games such as foosball, air hockey, pool, and a claws game. When the kids get antsy after ordering or eating, they can release their energies playing games while the adults have their own conversations.

As you would expect, there are many choices of pizza and a full menu of Italian specialties such as penne alla vodka as well as hamburgers, sandwiches and salads. Patrons should know that the restaurant makes their sauces and meatballs and all their entrees from scratch.

All orders can be take-out, and they deliver–even as far as halfway to Andes, at the Bovina turn.

The Healthy Options Menu, a cross-promotion with Delhi’s Cardio Club, offers such entrees as: Southwest Chicken Salad, Chili Lime Baked Tilapia with a side salad, Chicken Avocado and TurkeyAvocado Burgers 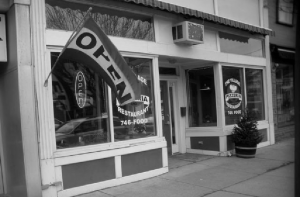 Check their Facebook page for a full menu and posted specials (e.g., for the Super Bowl).