My father was the keeper of the Eddystone Light,

He slept with a mermaid one fine night.

And from that union there came three,

A porgy and a porpoise and the other was me.

Oh, for the life of the rolling sea.

One night when I was a-trimmin’ of the glim,

A-hummin’ a verse of the evening hymn,

A voice from the darkness shouted ahoy!

And there was my mother sitttin’ on a buoy.

Oh, what has become of my children three,

My mother then she said to me.

Oh, one was exhibited as a talking fish,

The other was served in a chafing dish.

The phosphorous flashed in her sea-green hair,

I looked again and my mother wasn’t there.

But a voice came out of the surrounding night,

To hell with keeper of the Eddystone Light.

I quote this song in full—at least as much as I know of it—to give you an idea of the sensibility that dominates Carl Hiaasen’s mystery novels: crude, grotesque, sexually transgressive, and funny. This is the raunchiest book I’ve read in a long time. And one of the most entertaining. For about two-thirds of it, I was having the time of my life. Hiaasen is a gifted satirist who knows his material—funky Florida: the tourists, the fishermen, the developers, the police, the mansions, the dives, the sleazy motels, and, best of all, the beauty of the place. A long time journalist for the Miami Herald, he writes a clean sentence and knows how to rig it so that it takes a surprise twist. He is at war with corruption–official, commercial, and personal–and his cause is the preservation of what’s left of the natural environment. Like many of the best mystery writers, he’s a moralist of the cynical idealist type. His idealism is tempered and thoughtful; his cynicism knows no bounds.

That is why at some point in a Carl Hiaasen story, things get really out of hand. In the present case, the villainy of the villain (a would-be developer) involves an unthinkable act of mutilation that turns the plot upside down, while at the same time, the villain of the sub-plot, an obeah woman of the islands, indulges in behavior so bizarre and loathsome that I wanted to put the book down and quit. What I had forgotten, while I was relishing the first part of the story, was that reading a Hiaasen novel requires getting over squeamishness of any kind whatsoever, and then doing it again, and again.

Still, it’s worth it. The protagonist, an old Florida hand named Yancy, who lives on Big Pine Key, is a wisecracker with an ingenious imagination, and fun to hang out with. Demoted from his job as a detective, he ends up as a restaurant inspector, where he gets to observe food safety violations you never dreamed of and invents a device for corralling roaches, the better to count them for his reports. His predecessor, who gladly accepted bribes, never closed a single place down, even when someone died from food poisoning, but Yancy can’t be bought, and gets thinner and thinner with each passing month, since he doesn’t cook much and can no longer eat out, given what he knows. But sex is higher on his list of worldly pleasures than food, anyway, and he has enough of it to make up for his involuntary diet. The sex is not particularly erotic—Hiaasen doesn’t go into detail–it’s more in good fun. Though towards the end he implies that Yancy’s affair with a lovely forensic pathologist is getting a bit too kinky even for his taste. 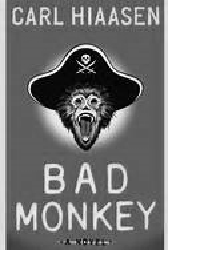 My favorite character in this novel is a gentle island man named Neville Stafford, who lives quietly on a beach in Andros where his ancestors have lived before him. Neville is humble and kind. It is he who owns the monkey of the title, whose name is Driggs; his patience in caring for this nasty creature, who throws feces at people he doesn’t like, makes him a candidate for sainthood. He fishes for a living, has three girlfriends on various parts of the island, and wants nothing more than to continue his existence exactly as it is. He, like Yancy, is being threatened by development. A relative has sold the beach to a man who plans to build a huge resort, and the only thing Neville can think of to stop him is peeing in the gas tank of the tractor that’s about to level the whole place. Neville realizes he’s different from most of the people he knows. He doesn’t need a car – his bicycle takes him everywhere he wants to go – his fishing boat, though its motor is way out of warranty, runs “like a champ” and has never stranded him. What else does a man need? He already lives in one of the loveliest places imaginable. He wonders “if something was mentally wrong with him for being content with what he had.”

This is where Hiaasen wins my heart. If there’s one thing wrong with Florida more than another, it’s the belief that big houses, big boats, and fancy cars will make you happy—not to mention plastic surgery and Viagra. But Hiaasen believes what Chaucer’s Pardoner only preached, that greed is the root of all evil: radix malorum est cupiditas. In addition to destroying Neville’s quiet beach, greed is responsible for the big spec house that’s cutting off Yancy’s view of the sunset (the house is being sold to a couple who already own three) and taking away the habitat of the last Key deer, small creatures, not even three feet high at the shoulder, who used to visit the beach where the house now stands.

You can be sure that those who destroy even a blade of grass in a Hiaasen novel will get what’s coming to them, and of course (spoiler alert!) they do in Bad Monkey. Its savagery and humor are fueled by the rage of a man who sees what he loves the most being laid waste day after day. At the same time, the novel captures what’s wonderful about the life that’s possible in that part of the world—the sensations of sun, wind, and waves; the wildlife; the beauty of beaches; the taste of fried plantains, conch fritters, and fresh fish; wearing shorts, going barefoot, and relaxing in a lawn chair after a shower (with your choice of beverage). It even makes you wonder whether you really need air-conditioning after all. ~