GILDED AGE IN ANDES: HISTORY OF THE GERRY ESTATE — January 2014 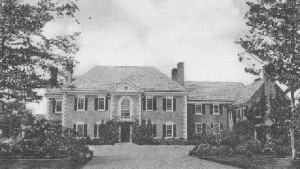 Many of you know or have heard of the Gerry Estate. But few realize that there were originally three separate estates. Their story began long before this land became a nation. For centuries, the rolling green meadows and thick dark woodlands were the hunting grounds of the native Lenape people, or as the early European settlers called them, Delaware Indians. In 1708, our area became part of a vast land grant from Queen Anne of England to a group of seven loyal Colonial merchants. The grant became known as the Hardenbergh or Great Patent and encompassed almost two million acres located in what are now Orange, Sullivan, Ulster, Green and Delaware counties. Today, the majority of this land is known by everyone as the Catskill Mountains of New York State.

By 1741, the wealthy Scottish immigrant, Robert Livingston, became interested in these Patent lands and instructed his son, Robert, Jr., to start buying up shares. They eventually acquired over a half million acres which were later divided among Robert, Jr.’s great-grandchildren. One of them, Gertrude and her husband, Colonel Morgan Lewis, received almost 20,000 acres. Colonel Lewis fought in the Revolutionary War and became both a Senator and Governor of New York. In 1820, the couple built their home (which still stands today) next to a beautiful mountain lake and called their new estate Lake Delaware. When Commodore Elbridge T. Gerry married the Lewis’ great-granddaughter, Louisa, the remaining property passed into the Gerry family. Commodore Gerry was the grandson of the famous statesman Elbridge T. Gerry who served as vice president under James Madison and was a signer of the Declaration of Independence. As the title suggests, Commodore Gerry was the chief officer of the prestigious New York Yacht Club and one of his many acclaimed accomplishments included founding of the Society for the Prevention of Cruelty to Children. Another one, much more shocking, was his advocacy of the use of the newly invented electric chair for capital punishment. The thought being that it was more humane than hanging.

The Gerry’s marriage produced three children: Angelica, Peter and Robert. Upon reaching adulthood, the Gerry Estate was divided up among them.

Angelica Gerry named her 200-acre parcel Ancrum in honor of the small Scottish village where Robert Livingston was born. She built a magnificent English-style manor house with formal gardens designed by the renowned landscape architect, Fletcher Steele. Angelica never married. She enjoyed tending to her gardens, raising prized delphiniums, until her death in 1960.

Peter G. Gerry graduated from Harvard in 1901 and was admitted to the Rhode Island Bar. In 1916, Peter, at age 37, was elected to the U.S. Senate. In 1925 he married Edith Stuyvesant Dresser Vanderbilt, widow of George W. Vanderbilt II. After the Commodore’s death in 1927, the couple received the portion of the Estate where the old Morgan Lewis house stood, retaining the name Lake Delaware.

The balance of the Gerry property was left to Robert L. Gerry and his wife, Cornelia, the daughter of the famous railroad tycoon, E.H. Harriman. Along with his purchase of a number of neighboring parcels, Robert quickly amassed almost 2,000 acres for what was to become his summer residence. In 1912, construction of the Gerry’s new home, Aknusti, began. According to family history, the name Aknusti was a native Indian term meaning “expensive proposition,” which at that time it certainly was. Renowned New York City architect, Thomas Hastings, built the expansive Georgian-style colonial mansion while Fredrick Law Olmsted’s landscape architectural firm was hired to sculpture the Estate’s vast acreage.

One of Robert’s favorite hobbies was horse breeding, so a large stable was built overlooking the valley. It was constructed of unique fireproof glazed block and included a circular indoor exercise track, breeding arena, an enclosed courtyard and 32 spacious stalls. Active with the elite Harvard Polo Team and horse racing during the 1930s and 40s, Robert bred many champion polo ponies and thoroughbreds at Aknusti. An avid hunter, Robert built his own game farm to raise and process a variety of game birds, including pheasants, partridge and ducks, for the Estate’s festive weekend shoots. A favorite story told by the present day Gerry family takes place during one of their ancestor’s formal dinner parties at the Mansion. As the evening’s guests sat around the large dining room table, ready for the main course, the server would emerge from the butler’s pantry holding a large silver-domed serving tray. As he placed it in the center of the table, he would announce that the duck is now being served. Upon lifting the lid, a live duck would fly out, amusing some guests and, most certainly, startling others. 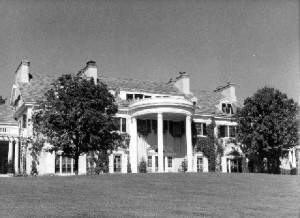 In the winter of 1953 a devastating fire ravaged the 65 room mansion, leaving only the four exterior walls and servants’ wing remaining. Millions of dollars of antiques, silverware and art were destroyed along with many personal family possessions. The mansion was quickly rebuilt, but with many of the rooms left unfinished and much of the grandeur from the “gilded age” forever left behind. This is the Broadlands mansion we know today. After many summers of enjoying his magnificent country estate, Robert L. Gerry died in 1957 at the age of 80. ~