EVERY LOVE STORY IS A GHOST STORY: A LIFE OF DAVID FOSTER WALLACE – January 2014

It’s not often that you learn something from reading a book, and I don’t mean facts, such as that Lusaka is the capital of Zambia. I mean learn something about life that you didn’t know before. This book changed my mind about a troubling issue–suicide–and showed me that one should not judge a person who takes his or her own life. The proper response is compassion and the deepest possible sympathy.

In case you aren’t familiar with David Foster Wallace, he was a 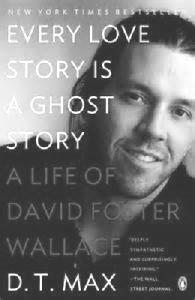 brilliant writer of novels, short stories and non-fiction, who started publishing in the late 80s, hit his stride in the 90s, winning major critical acclaim with his novel Infinite Jest, and, after publishing three or four more books (though not his long-awaited third novel), took his own life in 2008. He had suffered off and on from depression for most of his life. I became familiar with his work only two years ago through a friend, who recommended a collection of his non-fiction, Consider the Lobster, which I bought and read, along with a book of short stories, Oblivion. I was blown away. It was like reading Henry James or Proust for the first time. Or Nabokov. Nothing like it anywhere in sight.

David Foster Wallace is not so much an acquired taste as a highly specialized one. You either love him or you find him irritating. He has a fiercely devoted following but those I‘ve recommended him to have been lukewarm at best: to them the work is overwritten. This quote from a letter Wallace wrote to Elizabeth Wurtzel, author of Prozac Nation, a memoir of her depression, can give you a sense of how he thinks. He says he feels caught between “God . . . and a basic sense of trust in the universe v. fear that the universe must be held at bay and micromanaged into giving me some smidgeon of gratification I feel I simply can’t live without. . . . I think I’m very honest and candid, but I’m also proud of how honest and candid I am—so where does this put me.” Self-critical, recursive, moralizing: if this makes it sound as if Wallace is all wrapped up in himself, well, yes and no. He’s really trying to get to the reader. “The crux, for me,” he writes, “is how to love the reader without believing that my art or worth depends on his (her) loving me.” Wallace takes responsibility for reporting on the times he lives in, the culture he’s part of—sickened by irony, knowingness, and an assumed apathy–and comes back with a diagnosis that is both trenchant and hilarious and also (sometimes) with a treatment, for us, the ones he’s trying to save. In his last, posthumously published novel, The Pale King, the compassion he feels for people in pain, evident in most of his other work, reaches its climax. Wallace, a connoisseur of suffering who wants to abolish suffering, is also a smart-ass and a clown. That, and the convolutions of his baroque style, make him hard to read—and fun.

The reason I love Wallace is that he manages to get so deep inside his own mind, so far down I can hardly believe he got there at all, and expresses his reactions to things with such honesty and fearlessness, saying so many things all at once, not missing the slightest nuance, that it feels as though he were inside my head, and recording my experience, only more insistently, more intensely, more intelligently and completely than I ever could, not hiding anything from himself, breaking through all his inhibitions, avoidances and could never manage on my own.

Reading the biography is no substitute for reading Wallace himself, and if you haven’t read him, I recommend doing that first. But the account D.T. Max gives of his life is extremely helpful to anyone who wants to understand where Wallace is coming from and why he writes the way he does. Most of all, for ardent fans, it helps to explain and to mitigate the shock of his early death.

That is why I read it. I was so overwhelmed by his genius and talent, I couldn’t stand the idea that he had killed himself at 48. Learning about his academic parents–his father taught philosophy, his mother, English at the University of Illinois at Urbana–his early depression, the medications he took, the courses of electric shock treatment he underwent, his addiction to alcohol and marijuana, the long process of recovery (sustained, after an initial relapse), his time in a halfway house, his struggles to write, his teaching jobs, tumultuous relationships with women, until he found someone with whom he could live without traumatic break-ups—absorbing all of this fills in the blanks so that one comes to understand something about the roots of his difficulties and the enormous effort he made to overcome them.

Max, who is a staff writer for The New Yorker, intuits what we want to know about Wallace. He picks out just the quotations from his letters, from his literary work, and from interviews that I imagine I would have quoted had I been writing the book. He defines Wallace’s place in the landscape of contemporary fiction, describes his ambitions as a fiction-writer, shows us how he saw himself in relation to other writers. We get to see how he dealt with his agent, his editors, his critics, his fans, and the general public. We learn something about his relation to his mother, his sister, his teaching colleagues and his friends. Above all, he shows us enough of Wallace’s tortured relationship to himself so that we can at least glimpse the nature of his problems.

Long before the end, I felt tremendous gratitude to Max for having done the Herculean amount of work it took to produce this study—the archival research, extensive interviews, critical reading, poring through letters and hours of simply thinking through the implications of the material. Though the task may have been more Sisyphean than Herculean. When you arrive at the death, there is no burst of illumination that clarifies everything in a final moment of insight; in fact, the end is anticlimactic. But the low-key recital of the events leading up to Wallace’s suicide is reassuring in that you realize the author is not trying to force an explanation when there can be no possibility of knowing exactly why it happened. He is simply telling us all that there is to know—at least for now—and lets us draw our own conclusions. When I reached the last page, I felt I knew enough about Wallace’s life to understand why he might have ended it—in all probability, because he was in too much pain to stay alive. The idea that what he did was selfish—a standard reaction to suicide—is itself selfish. It is not for us to say he would have been better off trying to tough it out. Wallace gave his readers everything he had. He tried his best to stay alive. It wasn’t possible. The best thing that those who are left behind can do in this circumstance is make peace with it. And be grateful that he lived. ~