If you’re not familiar with Sue Grafton, W is for Wasted, the latest in her popular alphabet series (A Is for Alibi, B Is for Burglar), is one of her best and a good place to start. It begins with the murder of a sleazy private eye who doesn’t become an important character until late in the novel. Grafton’s account of why the police didn’t hear the shots—the man was killed across the street from one of their favorite hangouts—is a great example of her prose style, and of her general approach to life. “It might seem odd that no one in the bar was aware that shots were fired, but the volume on the juke box exceeds 117 dB, roughly the equivalent of a gas-powered chainsaw at a distance of three feet. The rare moments of quiet are masked by the high-pitched rattle of ice cubes in dueling blenders where margaritas are whipped up at a rate of one every four and half minutes.” The physical details, the sarcasm, and the sense of fun are vintage Kinsey Millhone—the thirtyish female PI who stars in the series. There’s a one-of-the-boys air about the way she talks and a slightly boyish persona to go with it.

Millhone is a no-shit kind of a person, a pragmatist in every inch of her being, so much so that sometimes I wish she would relax, take her eye off the ball, and allow herself a daydream or two, or the occasional speculation on the meaning of life. Grafton’s prose, with its focus riveted on the measurable, seeable, touchable side of things, once got so dull and fact-filled in an early novel I read that it reminded me of a similar moment in a long Wordsworth poem where he describes a pond, saying, “It was eight feet wide and six feet long.” The measurements may not be right, but my point is: you can’t get any prosier than that.

On the other hand, Grafton’s forthright, no-nonsense attitude is basically a relief. No “down these mean streets” rhetoric, no macho poses. Kinsey dresses in jeans and T-shirts. She has one dress—black—for all occasions. She lives in a tiny re-modeled garage with a sleeping loft, does her own house-cleaning, pays her bills on time, goes for a three-mile run every morning, and hangs out with her octogenarian landlord and neighbor, Henry, who is kind, shrewd, bakes a mean brownie and pours a generous glass of Chardonnay. A good thing, too, since Kinsey is no cook. Their rituals ground the main action and make the novels feel real, providing the reader as well as Kinsey with a retreat from crime and the many other kinds of mean behavior she encounters in the course of her investigations. As she says of herself: “I’m a person of order and regulation, discipline and routine.  That’s what makes me feel safe.” And that’s what I love about Kinsey: she knows her strengths and her limitations and isn’t coy about either. She’s modest and true-blue in a way that makes you feel she’d be a good friend, though strangely, she doesn’t have that many friends.  Maybe there’s just no room for them in the plot. 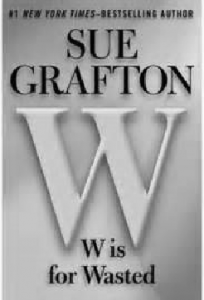 The second body turns up on the beach in Santa Teresa, the Santa Barbara clone that’s the setting for these mysteries (a place, incidentally, that has none of the alluring beauty and lotus-eating atmosphere of the original). The corpse has Kinsey’s name and phone number in his pocket, but nothing else to identify him. With time on her hands, she starts to research the man, who is homeless, and ends by uncovering the long and complicated series of events that led to both murders. How Grafton will manage to make the two story lines coincide is one of the book’s tantalizing features.

What makes this particular book interesting, though, beyond the experience of suspense afforded by its well-built plot, is Grafton’s rendering of homeless people, and her comments on homelessness itself. “My take on the indigent is that some are there because of temporary setbacks and some for lack of an alternative. Some are needy, some are off their meds, some have opted out, some have been ousted from facilities where they might be better served. Many are there for life and not always by personal choice. Alcoholic, addicted, aimless, illiterate, unmotivated, unskilled, or otherwise unable to prosper, they sink to the bottom, and if they’re down for any length of time, they lose the capacity to climb back out of the hole into which they’ve fallen. If there’s a remedy, I don’t know what it is. From what I’ve seen of the problem, most solutions perpetuate the status quo.” With the exception of the part about there not being any remedy (European social democracies do not have this problem), I agree with her assessment. I volunteered in a homeless shelter for a number of years and concluded, as she does, that the causes of homelessness are multiple and varied.

The one thing she doesn’t say here—but does show in the novel—is that as human beings, homeless people are no better or worse than anybody else. In fact, many of the other characters she meets on this case are a lot less appetizing than the homeless ones. Like, for instance, the person who turns out to be the villain. I wouldn’t say that Grafton has it in for well-heeled professionals in quite the way Law and Order does, but the contrast between the villain and the three homeless people who were the victim’s friends is worth noting.

As for the plot, it’s sturdy, well-paced, and compelling enough to keep you turning the pages—all four hundred and eighty-six of them. It provides an exciting struggle near the end between Kinsey and the bad guy, moments of contentment in Henry’s kitchen, and a nice interlude in which an old boyfriend turns up, but that’s just a tease, unfortunately.

As if to make up for the affectless, super-concise summary of what makes people end up on the streets that I quoted above, Grafton ends the novel with a eulogy for the dead homeless man and one of his friends, delivered by Henry’s 89-year-old brother. When I read it, I couldn’t believe what I was feeling. This is a piece of writing so eloquent, and so full of compassion and wisdom, it hardly seems to have come from the mind of tough, brass tacks, no-frills Sue Grafton. It’s a moving scene and an unforgettable moment. I’ll say no more. You’ll have to read the book. ~