I no longer bow hunt for deer, but Nancy and I along with our guests love venison and consume as many as three deer per year. I have passed on the chore of being the number one supply person for the family to my son Kris. Kris had already taken two, which had been neatly packaged, labeled and stored in his freezer. He called to say he had another which he would quarter up and send the next day with his super wife Nicole to the Catskill Center where she works. I picked up the filled cooler in the morning and had filet steak, inside filet, sirloin tip, hind steak, stew meat, ground meat packaged, labeled, in the freezer and fresh liver soaking in a bowl of milk. The following day the liver was drained, cleaned and fried up with bacon and onions, yum yum! The bones and scraps were delivered to friends with very appreciative dogs. Some may question how one hunter is allowed to take so many deer. The answer: deer management permits (DMPs) for different management units and deer management assistance permits (DMAPs) these issued to landowners who can show deer damage to forest regeneration; and a DMP transferred from me to Kris, as I still pay for a hunting license. Kris hunts near his home in Kerhonkson where the Department of Environmental Conservation (DEC) has determined that the deer population is almost out of control as it is in many other portions of the state. It was mentioned by a regional wildlife biologist that if venison was allowed to be sold commercially, overpopulations would quickly be resolved. I don’t see this happening any time soon. The DEC runs a program for those who hunt and are not gourmands. The meat is then distributed to people in need. 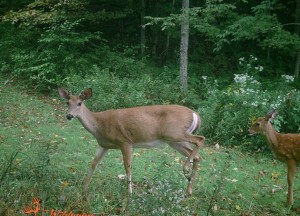 A very dastardly deed was perpetrated by some unthinking, uncaring fool when he put out in the forest meat tainted with a poison of some kind. A hiker along with his dog was enjoying a stroll on one of our Catskill trails when his dog found a piece of meat, ate it and succumbed shortly to a very painful death. So what was this purveyor of death trying to do? I can only guess; was he one of those few hunters who see the coyote as a competitor that should be eliminated or was there some other stupid reasoning, if you can call it that? I don’t know. I do know that this atrocious act can and did have unacceptable consequences; other wildlife species such as raccoons, opossums, skunks, foxes, fishers and all flesh-eating birds, and of course a person’s pet dog were made vulnerable to a horrible death. If a poisoned animal is found by another flesh eater, that animal will be killed and it could go on. This incident reminds me of the use of d-CON, a poison many are familiar with to control mice; the mouse ingests, staggers outside were it can be eaten by any of the critters mentioned above, killing or sickening them in the process. Please don’t use it; this stuff should be banned from the market. Ann Roberti questioned a DEC official and this was quoted, “Environmental Conservation Law 325.2 Pesticides (poisons) must be used in such a manner as to prevent contamination of people, pets, fish, wildlife, crops, property, structures, lands, pasturage or water adjacent to the area of use.” I would like to see a law that is more specific.

On a more cheerful note: one beautiful clear evening I observed a redtail hawk loft up from one of the back pastures, and as he gained altitude another smaller hawk, species unknown, drifted in at a greater height from the other side of the mountain. It was apparent that this hawk had interest in the rising redtail and, as it approached, dropped lower so that it was on approximately the same level. At this point there seemed to be interaction or recognition of some kind. Maybe it was just to say hello to a kindred spirit. They leisurely drifted off in concert toward the southern horizon.

A new avian species was noted on Bussey Hollow, not by keen eyesight, but on trail cam. In a picture taken while the cam was focused on the gut pile of an arrowed deer, one of the scavenging vultures did not resemble the others which were turkey vultures. A quick check of the field guide showed that it was not the commonly sighted turkey vulture, but a black vulture, the 110th bird species noted on the farm. I am including this bird on our list of sightings even though not seen by the naked eye, probably not legit from a professional birder’s point of view.

Through the first week of November the small roadside pond continued to attract a few ducks: one day two drake mallards and a hen, the next a single drake, then none, and the next with two drakes, no hen along with three wood ducks in what appeared to be eclipse plumage. If you like, you might Google “Wood duck in eclipse plumage”. The last feathered critter on the pond was a great blue heron that appeared rather sullen and fishless. Possibly Ollie the Otter had returned surreptitiously and taken the last sunfish.

When you receive this issue, rifle season will have been in full swing for just two weeks and will end on December 8th. Be aware that a late bow and muzzle loader season will start and end on December 15th, so some shots may still be heard. As of this writing, two does with very small antlers are out and about with their fawns; one originally had two, but one was taken by a predator prior to bow season! I love my venison, but feel attached to these guys and wish them luck! As we drive around our roads we no longer see the forest edge, but now we can see into the forest. Drive with care! ~