Rev. James Bruce was a visionary, a man of endless energy and determination. When he was called to become the pastor of the Andes United Presbyterian Church, he visited the community and wrote back to his wife in Mercersburg, PA, that she would love Andes. “All the houses are painted white and are surrounded by white picket fences.” They both did, indeed, love Andes.

The obituary tells of his involvement with the fire department, Andes Academy (predated the Andes High School which he was instrumental in getting built) and published Andes’ first newspaper, “The Student”. He was always fascinated with new technology that, I’m sure, prompted him to fund and start up the first telegraph in Andes, running first to a store on Main Street with wires being eventually strung to Delhi. As an elderly man, he was blessed to have lived long enough to see an airplane fly over Andes. For decades he recorded weather statistics for the village and kept meticulous diaries, almost up to the end of his life. His successful fight for a “dry” Andes ironically sealed the fate for the Hunting Tavern, one of three local establishments serving alcohol. The business closed shortly after the sale of alcohol was prohibited in the township. The Tavern was owned by the family who would, a decade later, become the in-laws of his son, Lt. Governor Matthew Linn Bruce when he married Lillian Ballantine, the granddaughter of Ephraim Hunting.

At home, he made much of his family’s clothing and resoled their shoes. He made a substantial addition to his home on Delaware Avenue (now owned by his great granddaughter, Buffy Calvert) and enjoyed woodworking and carving. He had beehives attached to a side window in his study so he could watch the endeavors of the bees. He made sure that his children were college educated. He typed a large number of his sermons on “the Underwood”. 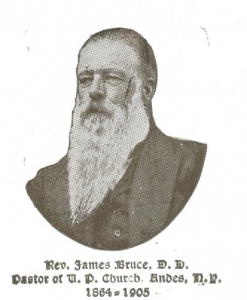 As pastor of the Presbyterian Church, he tirelessly served his congregation. His pay was meager and he often owed considerable sums to local merchants—the bills were always paid. On the 40th anniversary of his pastorate in 1904, he reported that he had brought 526 persons into the church, with the current membership being 242; he performed 398 baptisms, officiated at 161 marriages and at 334 funerals. The smallest number of funerals was in 1887 with 1 and the largest was in 1870 when he buried 23 of his congregation. He preached an even 3,000 sermons. He pushed his congregation to keep up with the times and urged them to remodel the church building in 1882 using money they didn’t have and again in 1904 (probably just before his 40th anniversary celebration) and both times, the money was raised by the end of the renovations.

He suffered a stroke in November 1913 and died a week later, never having regained consciousness. Medicine being what it was one hundred years ago he didn’t stand a chance! He was probably placed in bed while his family waited for him to die a natural death.

At his 40th anniversary as pastor, he commented that he didn’t know how long his relationship with his people and Andes would continue, “But be the time long or short my prayer for Andes will ever be, ‘Peace be within thy walls and prosperity within thy palaces.’”