This book is an excellent read, especially if you like memoirs and autobiographies, and a must if you’re a fan of Paul Auster’s.  (Auster, in case you’re not familiar with him, is a critically acclaimed American novelist, also a poet and a writer of screenplays, essays, and memoirs). Winter Journal starts slowly, almost awkwardly, with short stretches of prose that read like excerpts taken from a longer work.  If there’s a theme, it’s certain physical sensations the author vividly remembers having. They’re well enough written so you pay attention, but still, you wonder: where’s this going? Then, little by little the author finds his groove. He starts to list the various things his body has done in its lifetime, walked through fields, ridden on subways, sat in dentists’ chairs, trudged through blizzards, lain on sofas–you get the picture. Then, inspired by the idea of the catalogue, he starts listing the places where he’s lived.

Like a long freight train getting underway, the book moves forward, jerking a bit, pausing, grunting, screeching, slowly picking up speed, hitting a more or less steady pace and then accelerating, sixty, seventy, eighty miles an hour, until he hits breakneck speed and from then on the book is dazzling and un-put-down-able. Each time, he tells us where the place was, the address, how many rooms it had, how long he lived there, how old he was, what he was doing, who there with him, and how it felt, smelled, looked. The memories are pithy, and the form is perfect for what he wants to do–record the experiences that left the deepest impression, moving on as soon as their texture and flavor have been rendered. As he goes with his family from house to house, then on to a college dorm room and shared apartment, and from there through a series of cheap accommodations in far flung places which he can barely afford, the serial format moves with fluidity and ease and carries you onward as if you’re riding a long, long wave that never breaks. At times I marveled that mere words could produce such a feeling of momentum; it felt more like listening to music. 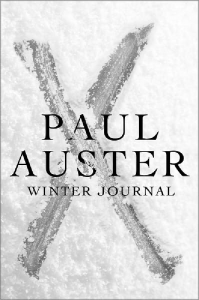 Auster is a master stylist, but that isn’t the only thing going for him. A man in his sixties, 67 to be exact, he has achieved a considerable degree of self-understanding. He’s digested the substance of his life, struggled with his difficulties, taken the measure of his achievements, and come to some sort of resolution. Towards the end, the catalogue shifts to crucial incidents in his relationships, notably the deaths of his parents and their effect on him. It’s not a history of complaints, nor a triumphal march from strength to strength–failure and success hardly enter in at all. Rather it’s the effort of a person who wants to retrieve the marrow of his existence on earth, like fingering pieces of precious cloth or standing before a great canvas, appreciating the sensuousness of the details; he wants to make sure he misses nothing. Unlike his earlier memoir, Hand to Mouth, which recounts his years as a writer living at the poverty line and exudes a feeling of bitterness, this book views his life’s events with acceptance and a certain degree of compassion, and even of gratitude. It’s a book written by a grown-up, not a narcissist, and because of that, it’s very satisfying.  You feel you’re in good hands. ~