A notification in this Andes Gazette was made previously to all creatures large and small that there would be in the central Bussey Hollow area on the date August 24 a major disruption of many ecosystem functions, and that all were being notified of same and it was suggested that a temporary exodus by all should take place for their own safety and creature comforts. Sure enough a large black bear was observed the day before making haste across a meadow on his way to an adjacent hollow, apparently having got the message. He did stop twice to take a rather perplexed look at the big white tent that had been erected in an adjacent meadow for the wedding celebration of my son Kris and his now-wife Nicole.

Eventually, on what appeared to be the best weather day of the year, 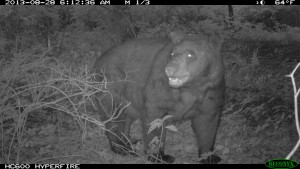 the tent was filled with over 100 Homo sapiens after a brief ceremony between a large cherry tree and large spruce trees which included some very appropriate Native American colloquialisms by the officiating Justice, a friend of the family: “Be like the trees. Trees in the storm do not try to stand up straight and tall. They allow themselves to bend and be blown with the wind. They understand the power of letting go.” “Letting it flow. That is the way to make it through the storms of life.” “Be like the trees. Learn to bend with each other, and grow with each other. Grow strong and be shelter to one another.” 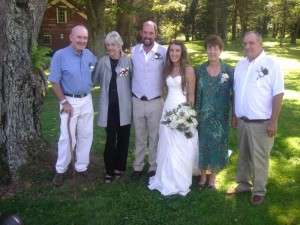 At exactly the right moment there was a fly-over, some say by an adult Bald Eagle, a sight that I missed. Some present said it was a Great Blue Heron which would be my guess. Either way, it was significant as both species are keen seekers of fish, as are the newlyweds. Within the tent there was a full-sized canoe filled with ice and just about every kind of beer there is, a bar where oenophiles could choose from a selection of whites and reds from Ray’s Fine Wines of Delhi and the most delicious finger food and dinner served by the wonderful folks from Ate O Ate of Roxbury, probably the best caterer in Delaware County, if not the state. There was not a scrap left for the family of five crows that daily scavenge the grounds as all was consumed or doggy meadows when you can remain secure in the forest with plenty to eat? With eating in mind, I was walking through overgrown pasture, where many large stones had been overturned obviously by a bear looking for critters such as snakes, salamanders, insects and such to supplement the lush vegan diet available with some protein. I spotted a small black animal in an apple tree and thinking and hoping it was a bear cub I eased over for a photo op; it was a porcupine. Some might ask, are you crazy? No, black bear sows with cubs are not known to be dangerous. They instead grunt to signal the cubs to get up into the closest tree and then hightail it out of the vicinity. When confronted suddenly, they at times will make a false charge stopping a safe distance away. This happens more often when they are acclimated to the presence of people (as in New Jersey.) Our Andes bears are hunted and are quite shy.

Talk about being shy, I have been unsuccessfully trying to get a photo of a large snapping turtle that inhabits one of the ponds and likes to bask on a half-submerged log. Upon my approach, she always splashes loudly into the safety of the depths. One time I was able to determine her aquatic amble through a trail of bubbles. She curved around returning to the log but refused to fully emerge, instead, showing only her nose and eyes above the surface; the standoff lasted about a full five minutes as if she were waiting for me to tell her a joke before she decided she had had enough, turned and headed to deeper parts. Another time she was facing away but still was able to detect my presence and, er, log off; maybe next month I’ll have a joke ready and get a photo.

This month there was a gray fox kit on Route 30 near the Dingle Hill curve; sadly the little guy was roadkill. Many of our avian migrators have already left for more hospitable lands to our south; many others from farther north are passing through.

“And there is a Catskill Eagle in some souls that can dive down into the blackest gorges, and soar out of them again and become invisible in the sunny places. And even if he forever flies within the gorge, that gorge is in the mountains; so that even in his lowest swoop the Mountain Eagle is still higher than other birds upon the plain, even though they soar.”  – Herman Melville ~