Last month I wrote about the wonderful experience I had when sighting a mature bald eagle swooping down and capturing a large fish in one of our local streams. Afterwards I began to think about how he carried the fish off which was horizontal to his flight path and remembering from pictures that our ospreys were always carrying them head first and parallel to their path, in a much more aerodynamically efficient manner. Intrigued, I emailed Tom Lake of the Hudson River Estuary project and an expert in bald eagles and asked if bald eagles ever aerodynamically position their prey, or are they just so big and strong as to never have to consider this? His reply was that, yes, they often do, sometimes having been observed dropping their fish when at a good height and then re-grabbing it in a more “correct” manner. I should have waited and watched and might have caught a glimpse of just such an aeronautical maneuver.

I do have to admit to having presently a “love/hate” relationship with another, but very small-feathered creature, the cliff swallow. A large flock of cliff swallows can be seen at the Shavertown Bridge during spring nesting season, particularly when there are mud puddles from a recent rain. They are gathering the mud for their nest building that consists of strictly mud, attached to a high and protected spot under the bridge. Originally we only had barn swallows trying to nest on the beams of our house, but now we have cliff swallows that have built an attached mud hacienda at a main peak where exposed beams meet. They are now apparently raising a second brood. I failed to remove the initial construction and now can hear the chirping of a brood within. In the meantime the guano pile on the rail is building. Time to grow up and migrate, guys!

Final on birds: I met with some friends who were camping over at Little Pond campgrounds, one of whom I had not seen in fifty years. (Some people never change, I get older.) They introduced me to a hatchling bird that they were raising and hand feeding, one they had rescued from the jaws of a free ranging cat. I immediately identified it as a cedar waxwing from the yellow markings on the tail. The little guy was in almost constant begging mode when anyone came by. The unending begging was attended to by toothpick for multiple solids and an eye dropper for an occasional libation. I wonder what the future of this poor bird will be now that he is attached to humans for his livelihood. Will he be able to adjust to living in the wild and will he be capable of normal socialization with his kindred kind? I don’t know. By the way, the cry cawing of the young crows begging to be fed has ended thanks to maturation. Update: the waxwing was left in a cat proof enclosure overnight and was gone in the morning. 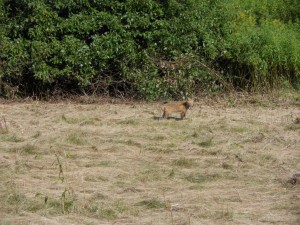 I observed a red fox kit (pup) out and about on the mowed area on the right side of Route 30 just past the old stone schoolhouse. It seems to have a fur-free tail (indicative of mange) and finally gave me a chance for a photo. It was strange to see him in hunting mode on a sunny late afternoon. He did not look in good condition, and I wish him well.

I was happy to see the return of the doe with small antlers which I have not seen for two seasons. She probably has been around, but unseen, for this period and has now produced a fawn as she did two years ago when I last saw her. She has small nubby antlers, still in velvet, that can be easily missed without binoculars. I first caught her on the trail cam, once with, and once without her fawn. She may have twins as the cam caught two fawns gamboling about together at the same location. On a later date I was delighted to sight her although she was at this time sans fawns. While on the subject of whitetail deer, there are two nice 8-pointers that make an occasional appearance, seemingly bonded and always acting in a kind of adolescent exuberance. Why “nice”? This is a hunter’s term for a buck, if taken, to be proud of. Their antlers just barely reach past their ears. That might indicate they are 2½ year olds. I call them the two brothers because they always seem to be together, although they may not be real brothers. Fall is fast approaching and I wish them well also. 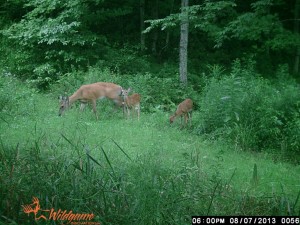 My friend Marianne on the Tremperskill Road was visited by a sow bear with her three cubs adding to the growing bruin population, much to the consternation of our farmers with corn fields ripening. The wild apple trees have produced a prodigious crop this year so quite possibly the corn crop will not get severely ravaged.

“Time is like a river. You cannot touch it twice, because the flow that has passed will never pass again. Enjoy every moment of life.” US Marine Corps Veteran~