What a gorgeous day! We really lucked out, after yesterday’s pouring rain. I didn’t get to see all there was to see and do, but I can tell you there was something for everyone and it was such fun to meet and greet Andes.

Next to the library, in Bohlmann Park, Scott Hill had made and installed life-size painted cutouts representing the Calico Indians and the Anti-Rent War. Brooke Alderson handed out flyers telling the story to people who may not have been aware of what put Andes on the map one hundred and sixty-eight years ago. 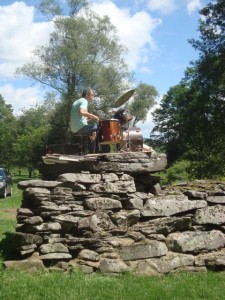 The library porch was packed from 10 am ‘til 3, when we took down the signs and closed for the day. Thanks to all who donated books for our “Monster Book Sale” and to all who bought the books at bargain prices. There was a great selection. The book sale will continue, of course, since we are continuously weeding out the old to make room for the new and because of the generosity of those who bring us “gently read” books.

After my stint at the book sale, I went to Ballantine Park, where David Capps had conceptualized a dance performance with improvised movements befitting the beautiful space, the trees, the streams and the rock formations. There was a cellist, Paul de Jong, accompanying the dancers as they wound through the trees, over rocks and tumbled through the grass. His music and the beat of the drums in the distance led the audience and the dancers farther into the park, where the natural landscape inspired the magical dancing. Deeper inside the park, Michael Suchorsky’s drumming could be heard, leading the dancers, like the Pied Piper, until, perched atop a mound of rocks, he beat the drums, while they and we, the audience, reached the other end of the park. There, behind a copse of trees, sat the cellist, again, inspiring the woodland fairies, splashing in the stream and rolling on the hills, and David, doing his “Stand-up, Sit-down” piece, concluded their entertainment!

How lucky we were to have experienced this extraordinary performance that could only be done in our beautiful Ballantine Park. Pat Brannen drove George Ballantine, the park’s creator, in to enjoy it.  His comment: “All my work is worth it for this day!”

My friends and I were starving and tired by then. It was after 1 o’clock. We hitched a ride with Jeff Ditchek to the Hunting Tavern Museum where we filled up on bratwurst with sauerkraut and German potato salad, eaten with fond memories of Frank Hartung, no longer with us, who always served it with his big, smiling face.

My daughter Amy and grandson Ian and his friends were to have spent the day with me, but instead, we spent the day looking for each other until, finally, our paths crossed when I was told they were having pizza at Hogan’s while I was getting ice cream at Woody’s! I never got to see the rest of all that was going on in town. I was exhausted but thoroughly happy to be among the people I love, in beautiful, wonderful, friendly, Andes. ~