The Woman Upstairs, by Claire Messud

Nora Eldridge, a teacher of young children, stuck in her mid-life, had always longed to be an artist, but this ambition had never come true. As a result, the frustration has built up in Nora and she fills the reader with her story in such a way that Nora becomes real; that what she feels, we feel, that what she experiences, we experience.

The novel opens with her cry to us: “How angry am I? You don’t want to know”: yet we do come to know. She declares herself a “good girl”…“a nice girl”. She continues to tell us what she is in a brilliantly written first paragraph of the novel that rivets the reader to the page. She lists all of the things that make her a good girl and talks about her tombstone: “It was supposed to say ‘Great Artist’, but if I died right now it would say ‘such a good teacher/daughter/friend’ instead, and tells us in no uncertain terms what it should say, not to be repeated here. She talks about what it is like to be a woman, how it’s like living in the hall of mirrors in the fun house at a carnival that doesn’t have an exit sign, only mirrors and more mirrors and hallways that spill into more corridors—no escape. Not until she meets Sirena, an Italian artist, and Skandar, her Lebanese husband, and their little boy, Reza, who comes to Nora’s classroom where he is bullied by other boys. 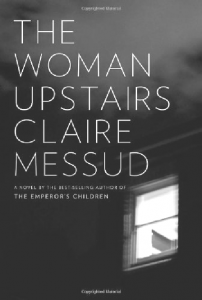 It is through Reza that she becomes close with his parents, especially Sirena, who has achieved what Nora has not, who rents a studio and asks Nora to share, allowing Nora to think that she can at last create the art that she has bottled up inside of her all of her life. She builds dioramas of great women writers such as Emily Dickinson and Virginia Wolff, faithful to photos and other research she has done, thus making little prisons for them to dwell in just as her life has been a prison until now. She had thought about marriage and children and love that had never happened, and as a result of her growing relationship with Sirena, growing closer and closer to her and her family, her desires become obsessive until she realizes that she is taking Sirena’s family for her own, that she loves them all—the beautiful child, the talks with Skandar who walks her home after each of her visits, the very warm and close friendship with Sirena, who inspires her to work on her art.

All through the novel, Nora recognizes her place in society and the place especially of artists and writers, who don’t quite live on the main floor of the house but inhabit the upstairs, alone, somewhat isolated from the rest of the world, looking from the outside into other people’s lives and happiness, totally unable to lead the life she always wanted. Messud gives us a whole woman. A woman we relate to and understand through the clarity of her writing style that makes you feel that Nora is your friend, telling you her story. Nora is real, she is sitting next to you on the couch with a drink in her hand, telling you her dreams and her aspirations, wondering why women, especially middle aged women, do not have what men have—the means to achieve their goals and be recognized, no matter their age. Yes, this is a feminist novel, but it is much, much more. The reader doesn’t only empathize with Nora, but embraces her fully, understands her rage, the rage that many women, men as well, I have no doubt, feel who enter middle age unfulfilled. The feminist viewpoint comes through and is often superseded by the way Norma sees the ways of the world and the ways in which art is created.

The ending of the book is shocking, filled with the most awful betrayals that raise many points about art, friendship, love, and obsession, but which make Nora realize that she had been “useful” again; and so her anger allows her to know things about herself that fed her inability to achieve what she wanted. Now she can use her anger and what she has learned to stop “being afraid of death”. I came away from this book feeling that Nora is my friend, that I understood everything about her, sympathizing with the way her life has been lived up to the present, outraged for what has been done to her. But the novel also tells us about the artist, the creator, who does whatever is necessary for art, and the nature of love and friendship. ~