On my four days a week drive into Margaretville along the reservoir on Route 30, I see that the wall of hardwood trees has fully leafed out and now impairs my ability to look deep into the trees; I am left with looking at the forest. No matter. It is a wonderful drive knowing these forests are filled with breeding and nesting songbirds and many other procreating and nurturing creatures. All these critters are intensely foraging or maybe just hanging out; they can be eating, but are always doing their best to avoid being eaten. This drive, with cruise control set at 47 miles per hour and classical music at close to full volume, is most joyful, serene and of course there are other descriptive words. There are no billboards, no stoplights, no stop signs, only an occasional country roadway entry point and rarely a vehicle in either direction–what a life! I will fess up that out of respect for the harried fool that winds up behind me I will push up the control to 52. So far I have had no collisions with the varied wild creatures that decide to venture forth on their perilous slow journeys or fast leaps across this man-made toll road (toll on the unlucky). There have been many slowdowns for roadside deer trying to decide whether to risk a leap to the other side or a kooky sauntering grouse that seems to think he owns the road and shows no fear. Our common crows, seemingly the smartest of all the fauna, watch, wait and seem fully aware of the potential peril of my looming motorized beast, and always move off just in time to remain alive. They are always watching, just in case. I think I have only seen one roadkill crow in my travels, a single dunce among these feathered intellects or just a tragic error by a very smart bird? I have seen the hapless road-crossing turtle that I quickly removed to the side he was headed for or placed in the turtle bag or box in the trunk to be released in one of the ponds on the property. Lucky dudes. I have Asian friends that just might make a gourmet meal of same, and on this I will confess that I and some surfing buddies, while in Hawaii many years ago, did barbecue a captured sea turtle. Back then, being young, macho and somewhat stupid, we took this protected species illegally. I remember it tasting like fishy chicken. Please do them no harm.  And, speaking of turtles, I spotted a freshly hatched, painted turtle the size of a quarter on my driveway going the wrong way, not toward the ponds. This lucky little guy was captured and quickly released into a pond edge with plenty of cattails for cover, as a stalking blue heron would scarf him up in an instant. Sadly, Nancy found one the next day that was not so lucky but DOA.

The local Canada goose nest was, as usual, raided under the cover of darkness with all eggs and even possibly the adult taken, this the result of predation by a mink, raccoon, fisher or even possibly Ollie the Otter. Wildlife officials consider Canada geese to be numerous. The predators mentioned are low in numbers, at least around here, according to my solitary observations. So, go Mother Nature! Note, I did not mention the rapidly rising population of our not so beloved coyotes. 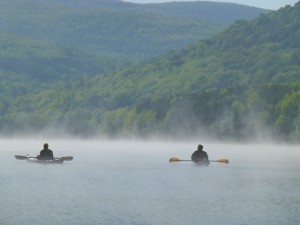 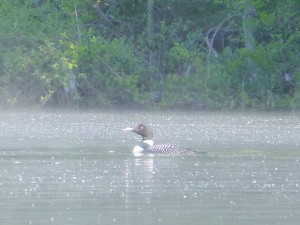 Loon on the Reservoir

A group of friends kayaking on the Pepacton on a perfect misty morning spotted a loon cruising around that consented to a photo op. Another friend sent me a picture of a snake she could not identify hanging around where she keeps her Leonberger puppies. It was a beautiful milk snake, a species that got its name for hanging around barns looking for mice, but thought by many farmers to suckle their cows’ udders. Not so; just want those pesky mice, Mister Farmer. The milk snake does not give live birth, but lays eggs in appropriate places. Another trusted friend reported seeing a whirling mass three feet in diameter of worm-like creatures three feet long, ¼ inch diameter, and gray in color, at the exit of a newly excavated local pond and asked if I knew what they might be. I had no idea. They could not be American eels or sea lampreys, these not possible for logistical reasons, so I called a DEC fisheries biologistwho trekked to the location and inexplicably they were gone. The mystery remains. 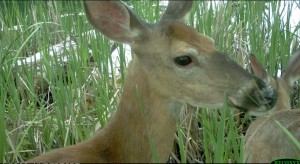 The cacophony of morning bird calls that “sounded like an orchestra tuning up before a concert” has diminished as territorial and mating activities have been replaced with housekeeping duties. Summer birds (my jargon) have arrived; Bobolinks and Baltimore orioles. Scarlet tanagers, one of my favorite woodland birds, have been sighted by neighbors. The bluebird box close to the house has five eggs and feeding activities should be taking place as you read this. Also, my bat house should be up on the sunny side of the old garage quite soon and hopefully occupied by those who have had a habit of hanging out over some old beams in the breezeway and defecating where it is not appreciated.

“It is hard to fail, but far worse to have never tried to succeed.” Teddy Roosevelt  ~