June 1st was National Trail Day and for Andes it also represented the one year anniversary of Andes’ own Rail Trail. As people gathered at the start of the trail to celebrate and hike, it was fitting that the mother of the rail trail concept, Ann Roberti, should be honored for her tireless work in having successfully brought her vision to fruition. Volunteers from Andes and the surrounding communities helped in many ways, but we all know that without Ann’s determination and relentless effort this hiking trail would not exist. 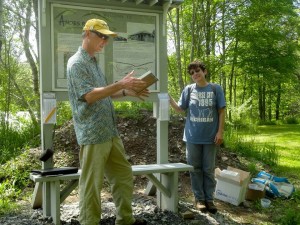 Approximately 20 people gathered at the kiosk, and as Ann announced that the hike was to begin, Jeff Ditchek asked all to gather around the kiosk where Ann was recognized for her efforts. She was presented with a simple award; nothing fancy but the sentiment was heartfelt. Andes now has a rail trail, which has since been extended into the adjacent steep hillside called the Bullet Hole Spur. A place to meander or take a strenuous hike, depending on your mood or ability. 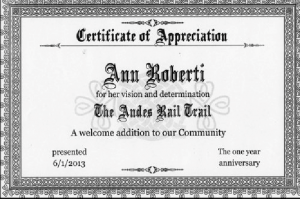 Jeff noted that while the trail is officially called the Andes Rail Trail, to many it will forever be remembered as the Ann Roberti Trail. ~