A few days prior to the deadline for the previous Gazette was a sad day. When I viewed the video footage from the trail cam that is focused on Ollie the Otter’s favorite log in the Lower Pond, I saw a couple of coyotes frolicking on the now-frozen solid surface, a single shot of a large bobcat crossing and then, two nights later (the cam notes the date and time of each shot), four grainy shots of the bobcat again crossing in the same place and direction of the previous night carrying a kill – Ollie? I must say I was depressed having thought that Ollie was gone, he who I had anthropomorphized and thought of as a new and welcome creature into my back yard who I could, when lucky, watch and in turn report on his antics. It appeared through initial viewing of the cam shots of the bobcat carrying his prey by the nape of the neck, its eyes reflecting the flash of the camera, that it was Ollie, but more detailed and intense scrutiny began to give me doubts. There was the ear that appeared to be too long, not like an otter’s small ear and what seemed like two small feet more like that of a rabbit and no long otter tail. Intrigued by this new possibility, I forwarded the shots to my son at the DEC.  He had a longtime wildlife biologist do some scrutiny.  Also to two friends at the Audubon Society who are not only into birds, but all wildlife species. To my delight, all felt that the kill was not an otter but in fact a cottontail rabbit and judged it to be  quite doubtful that a bobcat would attempt to capture an otter. And that, if one did, it would be faced with a hell of a fight, with a good chance of losing. A neighbor reported that otter slides had been noted on the Tremperskill, which may or may not have been Ollie or in fact that of an otter at all, as other critters such as a mink or a beaver will occasionally slide down a snowy bank. Right now the ponds are frozen solid making access tough. As otters, mink and other predators search for sustenance and scout the open water courses, I wish them well on these perilous journeys. The habitat is crisscrossed with our roads and I presume that the clever among them will use the many culverts for passing this major peril. Of course not all will and may succumb to our ‘toll roads’. I will continue my surveillance for Ollie the Otter with vigilance and enthusiasm and make due report!

By the way in the last issue there was a change on the scientific name for river otter, Lontra canadensis to Lutra canadensis by the intrepid editors at the Gazette. I appreciate their scrutiny, but had they gone a little further they would have found that the ‘Lutra’ has been changed to ‘Lontra’, the latest taxonomic handle. The canadensis part, which
should be spelled with a lower case c, means ‘of Canada’. Why, I have no idea, as otters have always been native to the northeast. Hence, the name Lonnie will remain if another Lontra canadensis comes around. 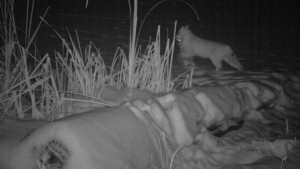 The webcam captures a shot of the Bobcat with his prey

Some further research on otters finds that there is no open hunting or trapping season in our wildlife management unit (4P) and in all adjacent WMUs. All of the Adirondacks and both sides of the Hudson River south to the Bronx have open trapping seasons. A retired wildlife biologist working in DEC Region 3 during the 70’s and 80’s inspected close to 400 otters taken by cooperating trappers. The pelts were required to be tagged and sealed by the DEC and the rule continues to this day. After the research which included checking the guts (what they were feeding on), their sex and their teeth for aging purposes, it was deduced that the River Otter populations were secure in New York State. In and around 1998 close to 300 were live trapped and released in portions of western portions of western New York State where the season remains closed and monitoring continues.

The snow conditions lately have made for great tracking and for surmising what is going on during the night when many critters are active. I think it was the “pole barn rabbit” that was the one captured by the bobcat and caught on camera as there are no tracks or scat in what were his usual lairs. What I call the audacious rabbit seems to continue to survive even though the bobcats (I think there are two) patrol his habitat close to the house almost every night. I call this guy audacious for his occasional mid-day jaunt across the snowy front lawn. Try this, pal, during the spring, summer and fall when the hawks abound and you just might become toast.

Birdfeeder social dynamics are at this time thus: two red squirrels are the bosses and no one messes with them; the avian bullies are the dozen blue jays. It is when they panic, alarm-call and scatter the chickadees that white breasted nuthatch fly in, reign and feast. There are a couple of ground-feeding slate colored juncos, one of which tried to enter Nancy’s computer room one night, and an occasional visit by a hairy woodpecker. A solitary mourning dove sits around on the ground, scours the cracked corn scatterings and contentedly watches the sideshow. ~