My Beloved World By Sonia Sotomayor

This riveting personal memoir, just out, and happily to be found on the new books shelf at the Andes Library, is a pleasure to read on so many levels. It is the story of a young girl from the tenements and projects of the South Bronx who pulls herself up by her jumper straps.  She transcends both internal and external obstacles. We get an inside look at the diverse cultures of her schools through college and law school, and gain a view into the workings of private law firms and the New York District Attorney’s office. The book ends at the point, 20 years ago, when she first became a judge. I await its sequel! 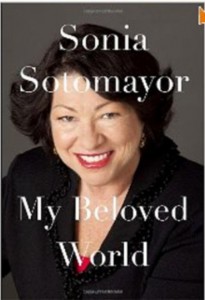 In her preface Sonia explains why she chose to write more intimately about her personal life than might be expected of a member of the Supreme Court: the possibility “that some readers may find comfort, perhaps even inspiration, from a close examination of how an ordinary person, with strengths and weaknesses like anyone else, has managed an extraordinary journey.” And so we learn about how she took charge of her juvenile diabetes at the age of 7; contended with bickering parents, the father alcoholic, the mother emotionally remote and often physically absent; how she instinctively knew to seek and find succor, companionship and guidance from her precious grandmother, her Abuelita.

Sonia credits “the native optimism and stubborn perseverance” she was born with, as well as the support and love she drew from those closest to her, with making the difference between success and failure. The outcome of her life and that of her childhood pal, her cousin Nelson, who succumbs to heroin addiction, offers dramatic contrast. Though she felt outshined in their youth by his brilliance, and he had the father she wished for, she acknowledges, as did he, that she had a discipline and determination that made all the difference.  We are invited into the world of her family and friends, the Nu-yorican culture and are taken along on family trips to Puerto Rico. She helpfully includes a glossary to translate the many Spanish expressions.

As a young girl she was seduced with the notion of being a detective—she felt her mind worked in ways similar to her beloved Nancy Drew—but realized her diabetes ruled out that career path. Soon, inspired by watching defense attorney, Perry Mason, on TV, and the show’s prosecutor, Burger, who was a good loser, and more committed to finding the truth than to winning the case, she decided to make the law her goal. Most of all she was fascinated by the judge on the show, the personification of justice, who ultimately called the shots. That ambition she knew to keep under wraps.

In pursuit of these goals Sonia aimed to shape herself; she volunteered to do Bible readings at church in order to learn to speak confidently in front of an audience; she studied hard during her 8 years at Blessed Sacrament School.  While at Cardinal Spellman High School she became an active participant in the Forensics Club, where skills of logical argument during debate were honed and she took as a role model a teacher who was both a progressive and an activist.

Her friend Kenny, a freshman at Princeton, urged her to “try for the Ivy League,” a term she had never heard. We follow her college visits to Yale, Princeton, and Radcliffe, learn of a revelation experienced regarding the special cachet of her chosen university during a shopping expedition with her mother for college clothes. When the rude, dismissive saleswoman learns that her customer is headed to Princeton, her head swings around “as in a cartoon double take” and she is suddenly all courtesy and respect.

We witness how Sonia navigated the unfamiliar waters of Princeton and how she continued her pattern of making the most of every opportunity for self-cultivation, including her work-study stint as a keypunch operator at the computer center.

While she saw her own family reflected in the pages of Oscar Lewis’ La Vida,  she realized that he lacked an appreciation of the richness of the Puerto Rican culture, the strengths “in our collective psyche that account for our resilience…” which she saw in her mother’s reverence for education and faith in community, and her Abuelita’s generosity, her passion for life and poetry, her power to heal.

At Yale Law School she made friends for life from small groups and the female minority sisterhood she connected with there. She found a felicitous topic for an article she published in the Yale Law Journal.

At a recruitment dinner for a well-respected small Washington firm that did both corporate and international work, Sonia found herself facing the partner steering the event. After introductions, the partner immediately asked if she believed in affirmative action. When she replied positively, he asked, “Do you believe law firms should practice affirmative action? Don’t you think it’s a disservice to minorities, hiring them without the necessary credentials…?” Continuing his insulting interrogation, he asked if she thought she would have been admitted to Yale Law School is she weren’t Puerto Rican. She replied, “It probably didn’t hurt, but I imagine graduating summa cum laude and Phi Beta Kappa from Princeton had something to do with it, too.” What character and grit she demonstrated by going ahead with the formal recruiting interview the next day in which she called the law partner on his earlier comments and, though he was ready to forge ahead with the hiring process having seen her résumé, she withdrew. She offers readers a cogent rationale for affirmative action programs: “…to create conditions whereby students from disadvantaged backgrounds could be brought to the starting line of a race many were unaware was even being run.”

Sonia draws a vivid portrait of life as a “duckling”, that is a rookie assistant DA, in the New York City District Attorney’s Office under Robert Morgenthau, as she moves up quickly from prosecuting misdemeanors to felonies.

During consultation with a mentor she was struck by the realization that appealing to a jury only through logic wasn’t sufficient; that an appeal to emotion, too, was a skill already in her repertoire. Once she leveraged her emotional intelligence in the courtroom, her entire approach to jurors changed, from the questioning of the jurors to the structure of her summation. She never lost a case again.

Sonia was recruited to Pavia & Harcourt in 1984, a New York City firm of 30 attorneys where she defended the Fendi fashion house against makers of counterfeit handbags, dealing with trademarks as part of intellectual property law, and was elected to partner. Meanwhile she engaged in pro bono work with the Puerto Rican Legal Defense Fund (now Latino Justice) and SONYMA, which was establishing a program to make mortgages available to working class families, and the Campaign Finance Board. All of this experience gilded her resume and one day Senator Moynihan’s judicial selection committee sought her out to apply for the position of a federal district court judge. After 18 months of waiting for the nomination to clear, Sonia was confirmed by the U.S. Senate in August 1992 to serve on the Court for the Southern District of New York, the mother court, the oldest district court in the nation.

As with all the other firsts in her life, she was initially terrified, but compensated with ferociously long hours.  She jumped in and found her groove. This woman was going to make her mark on the bench! ~