At our editing session Mary Tucker remarked that she’d only seen one woolly bear caterpillar so far this year. A lively discussion among our volunteer staff made it clear that we were lacking in clarity regarding woolly bears and their forecasting abilities. Here’s a compendium of some of the computer knowledge we accrued:

The true woolly bear or black-ended bear, known in the south as woolly worm, is the immature larval form of Pyrrharctia Isabella, the Isabella tiger moth and one of the few caterpillars most people can identify. The bands at the ends of the caterpillar are black, and the one in the middle is brown or orange. 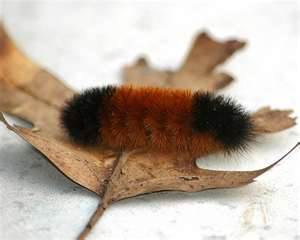 This medium-sized moth, ecru and beige in color, is common from northern Mexico throughout the U.S. and across the southern third of Canada.

Woolly bears are covered with short, stiff bristles of hair, and in field guides are found among the “bristled” species, which include the all-yellow salt marsh caterpillar.

Woolly bears, like other caterpillars, hatch during warm weather from eggs laid by a female moth. Mature woolly bears search for overwintering sites under bark or inside cavities of rocks or logs. That is why they are often seen crossing roads and sidewalks in the fall.

When spring arrives, they spin fuzzy cocoons and transform inside them into full-grown moths.

How the woolly bear became famous:

In the fall of 1948, Dr. C. H. Curran, curator of insects at the American Museum of Natural History in NYC took his wife 40 miles north of the city to Bear Mountain State Park. He collected as many caterpillars as he could in a day, determined the average number of reddish-brown segments, and forecast the coming winter weather through a reporter friend at The New York Herald Tribune. Dr. Curran continued his experiments over the next eight years, attempting to prove scientifically a weather rule of thumb that was legendary around Bear Mountain.

According to legend, the wider that middle brown section is, the milder the coming winter will be. Conversely, a narrow brown band is said to predict a harsh winter. Dr. Curran, his wife and friends, calling themselves The Original Society of the Friends of the Woolly Bear popularized and, to some extent, legitimized the local folklore, meanwhile enjoying fall colors and having fun. The annual counts were resurrected 30 years after the last meeting of Curran’s society, and have continued, more or less tongue in cheek, since then, by the nature museum at Bear Mountain State Park.

Most scientists discount the folklore of woolly bear predictions as just that. Mike Peters, an entomologist at the University of Massachusetts, doesn’t disagree, but says there could, in fact, be a link between winter severity and the brown band on the caterpillar. “There’s evidence that the number of brown hairs has to do with the age of the caterpillar—in other words, how late it got going in the spring. The [band] does say something about a heavy winter or an early spring. The only thing is…it’s telling you about the previous year.”

We’d like to hear from our readers regarding local woolly bear sightings, their experiences with this creature as a weather forecaster, and any other weather prediction tips and knowledge.