LOCAL LARK IN THE PARK EVENTS ENJOYED BY MANY

The Ninth Annual Lark in the Park (September 29-through October 8), a celebration of outdoor activities in the Catskill Park and region, encouraged record numbers of participants, with many of its 42 events taking place in the Andes area and attended by local residents. The “Lark” this year was co-sponsored by the Catskill Mountain Club (CMC), The Catskill Center and the New York/New Jersey Trail Conference.

Activities in and around Andes included a paddle on the Pepacton Reservoir, on September 29, 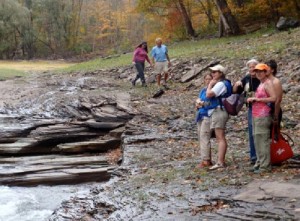 led by Andes resident and CMC board member, Ann Roberti, and Nicole Vente of the Catskill Center’s staff. Five people enjoyed the height of fall colors in the newly opened city waters.

On September 30, the first annual Catskill Mountain Club dinner, celebrating the Lark, and hosted by CMC President, Steve Berg of Andes, was held at the Hanah Mountain Resort and Country Club near Margaretville. Sixty-five people attended and heard author Alan Via describe his new book: “The Catskill 67, A Hikers Guide to the Catskill 100 Highest Peaks under 3500” with humorous insights and slides. Two Town Supervisors attended: Marty Donnelly and his wife, Yvonne, of Andes, and Marjorie Miller, of Middletown.

Andes resident and CMC Board member and activities chairman, Jeff Ditchek, helped stage the Lark dinner event with Jon Mogelever of the Catskill Center. Maria Ditchek and Julie Berg made sure the sign-in process went smoothly.

The Lark’s first through hike, led by Rick Roberts of the CMC board and Catskill representative of the Finger Lakes Trail Conference, traveled the Finger Lakes Trail through part of Andes on its way from Margaretville to Downsville over a four-day period, from October 2 through the 5th. Three people braved their way through some rather damp weather. 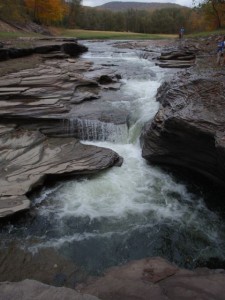 The shale rocks at Moore’s Falls

Ann Roberti again led a Pepacton paddle on October 3, with a great turnout of nine people enjoying good weather. The next day, she and Bob Moses of Delancey conducted a trail maintenance project from Big Pond to Alder Lake, also part of the local Finger Lakes Trail. Three people participated, improving the trail for others to enjoy.

Ten people enjoyed a hike around Alder Lake, led by Dave and Carol White on October 7. The group enjoyed various attractions including remains of the great Coykendall estate, an attractive beach and a dam. The Whites have authored numerous hiking books including “Catskill Day Hikes for All Seasons.”

Seventeen people, many of them local, enjoyed a movie night on October 3 at the Hunting Tavern featuring little-known facts and dispelling myths on black bears. Gazette columnist, and Andes resident, Jack McShane, hosted the event. Q&A was cut a bit short on this presidential debate night.

The Lark in the Park celebration began in 2004 with the 100th anniversary of the Catskill Park. It also inspired the formation of The Catskill Mountain Club and this year three hundred people enjoyed the 10-days of festivities as growing interest in outdoor activities draws more and more tourism to our area. ~