FIELD NOTES: BARRED ON THE BEND

As I write this the leaves are browning and dropping. The color season was good, but not great as the maples were yellow with only a few bright red. What in my mind held it together was the brilliant green of the oaks and conifers which resulted in a real nice contrast. As my wonderful neighbor, Pearl Fletcher, now passed away, always reminded me, October 4th is the peak for Bussey Hollow. This year she was surely right. 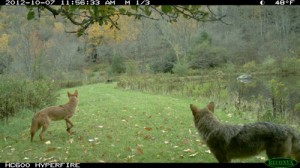 Two coyotes, each with a distinct color phase, one tawny brown, the other silvery gray

As September and migration season was ending on a bright day the sky was suddenly darkened by a huge flock of mixed blackbirds, redwings and grackles and, as they passed, a few stopped in a large-crowned black cherry tree and rummaged around for a snack. To their apparent dismay they found no fruit, and also no respite as they quickly left to catch up to the disappearing flock. I could only hope that they find more bountiful trees on their long journey south. Four Tom turkeys peck their way through the fields on a pretty regular basis and the two local cottontails, which inhabit a lush swale, somehow continue to avoid the nightly prowling of the coyote chorus. (I continue to question, is it the echoes of a few or the voices of many?)

The “Barred on the Bend” has returned and what do I mean by that? Across the road many years ago on a particular bend on a particular trail marked by a small hemlock tree and a gnarly twisted maple, the two appearing almost to be attached at the hip, a Barred Owl often found a comfortable roost. Sometimes instant flight at my appearance, other times a sit and a stare down would occur, and then for a decade not a Barred Owl to be seen. Now to my delight one is back although a lot more spooky than his forebear with no waiting for a stare down just a silent loft and retreat into the surrounding forest.

“Breaking News, Happening Now”, Sunday, 10/7, 12 noon – I was going to say the blackbirds have returned, but that would not be right, the September flock must be way further south by now, but at this present moment there are at least 200 in the cherry and maple trees and now descending to cover the lawn below the apple trees. They appear as a flowing, feathered, living black mat. There are no apples and no cherries to feast on so can they be eating grass? Not much sustenance for their sojourn south. Amazing.

Two weeks ago Nancy informed me that there was a turtle shuffling down our road. I quickly vehicled down to the location and there was a mature wood turtle determined to continue a dangerous amble down the center-line of the road. He or she was scooped up and placed in a box that I keep in the back of the car just for such rescues. The box is important as on one other such occasion I had no box and a rescued turtle found its way under the seat where it was close to being inextricable. Turtle boxes, snake bags and heavy canvas gloves are very handy for an amateur wildlife rescuer. As I was releasing Woodie the turtle into our lower pond I noticed that his left eye was missing and wondered how he was able to amble down the road in such a straight line. Well his beeline into the pond and safety also was straight as an arrow; he will do just fine in his new home and I wished him well. 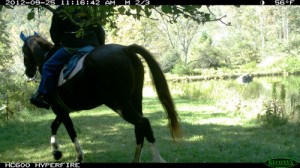 As I write this the leaves are browning and dropping. The color season was good, but not great as the maples were yellow with only a few bright red.

Putting out trail cams at various locations in the forest is a lot of fun and results in many surprises. Where the cams are set up is important and location takes some thought and experience when the goal is to capture a mixed bag of wildlife species doing what they do in the wild. Well-used trail intersections are my favorite and most productive. I always place the cam waist high and on a tree that is inconspicuous, as most sought subjects are low to the ground and not “head high”. Trail cams show the date and time of the photos enabling you to know when particular species and sometimes particular individuals are out and about and what they are doing. Species caught so far include deer, bear, bobcat, fisher, porcupine, raccoon, squirrel (black and gray), redtail hawk, neighbors hiking with permission and surprises such as “the headless horseman” caught twice with the cam too low to catch the head of the unknown horse person. Alas, and although I have great hope, I have yet to capture Bigfoot. A couple of shots I really liked were of an inquisitive bear looking like he was trying to smootch the camera and one of two coyotes, midday, that were of two distinct color phases, tawny brown and silvery gray. Two coyotes out and about at midday were counter to my long-held view that these secretive canines were strictly nocturnal and crepuscular with some activity at dusk and dawn.

Last month I mentioned rattlesnakes and the need to avoid and at the same time respect and protect them and yourself by heeding their warning rattle “please don’t tread on me”. There was a buried news item that caught my eye concerning a West Virginia preacher who died from the bite of a rattlesnake that he was handling. It went on to say that snake handlers believe Mark 16:17-18 bids them to handle poisonous serpents: “And these signs will follow those who believe: in My name they will cast out demons; they will speak with new tongues; they will take up serpents….and so on”. I will let you go figure. I will continue to follow the rule not to tread and add nor handle.

Unknown author – “The trail in the evening can be one’s own kingdom no matter who owns it”.~