The perfect summer day is: bright sunshine, crystal clear skies, ideal temperature, low humidity, no bugs and, best of all, the mower is broken! A day to stroll, to hike and observe that which nature desires to expose of herself. On this wonderful day at the end of the first week in August she wouldn’t show much. Bird life was minimal as the Swallows, Bobolinks, and Blackbirds and even the Bluebirds had left, apparently beginning their expeditions to southern environs known to them to be more gracious than Andes in the pending winter months. It seemed an early exit as compared to years previous giving thought to global warming, which of course should result in the opposite, a late departure, or maybe an oncoming early and very intense winter. Late August at a social with friends on Herrick Road we observed a large flock of Cedar Waxwings gleaning the insects inhabiting the surface of their pond and without an apparent inclination to abscond to the safety of the warm south. Great drought has caused an early leaf drop and may negatively impact the colors of the coming foliage season. Leaf peepers beware! 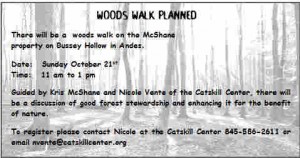 I have now contemplated and somewhat accepted my new physical limitations due to my recent back surgery. Am I becoming like one described in the book Arthur and George by Julian Barnes: “A man whose ambition is a rural villa, a pair of slippers, a garden and gardener and who longs to hang at the gate awaiting the mailman to bring him news from distant states and distant lands”? (This has been edited somewhat.) No way, but temporarily, I am willing to accept my condition.

Having said that, some other observations from the villa: two cottontails remain alive and well, surviving the nightly prowling and howling of the local coyote chorus group. Are there six or seven as it sounds in the darkness of the night, or is it really only three or four? Very hard to tell, but more likely the lower number. The pups are now out and about with the parents and when briefly separated I imagine they make vocal connection, if just for some familial assurance. Bears and bobcats are silent as they make their nightly prowls as recorded on the two trailcams. The cornfield planted by Marty Liddle, as of this date September 3rd, has not yet been plundered by the bruins as his cornfields along the Tremperskill have been. This now brings me to a great dilemma: the other day Marty approached me and detailed the cornfield destruction and the cost which has run into thousands of dollars for him, not a small sum for a local dairy farmer. The NYS Department of Environmental Conservation wildlife biologists have recognized the increasing bear population and have been issuing nuisance-kill permits to those who can show major damage and financial loss. This year Marty has been issued three, and so far has filled two. He asked if I would allow the houndsmen to use one if their hounds treed a bear on my property or kill one myself using the third tag if I got the chance. I had to think some time before answering. I considered Marty’s financial loss and also the fact that the bears are now another threat to the deer herd (fawns) and my apple trees (only one so far this year) and the fact that the bruin population has never been higher, at least in my lifetime. On the other side I looked at the fact that my cams have only caught two different bears and there is the possibility that they have succumbed to the first two tags. There has been no damage to the cornfield on my property and the regular season (bow and arrow) will begin October 1st. Bears should be denning early this year because of a low supply of their natural food, hard mast. This is the situation at least in Bussey Hollow. This can of course vary over the area. I said no.

My son and his girlfriend, who live down in Kerhonkson, took a hike with two friends up on the old “Lundy Estate” which is now state land and is just a mile or so from where they live. Up high on a rocky knoll they encountered three timber rattlesnakes, two of which were five to six feet long, the other only about two and a half. The snakes, which are a protected species, acted in typical rattlesnake fashion. They remained where they sat, observed the interlopers and did some warning rattling. The only rattlesnake I have ever been lucky enough to observe was on Mount Tremper. I have not heard of any sightings in the Andes area. If you do ever encounter one, he or she may rattle, which is only a warning to “please do not tread on me.” I ask that you don’t disturb this special, rare and endangered creature. Just consider it a great day and appreciate that you did not tread on him.

So why are these ruminations entitled “boulder envy”? Having some friends over for a social visit, my wife took a few of them for a short walk around the property. One woman had spoken proudly about a big boulder that she was having placed at the edge of her pond. When Nancy showed them our pond with a truly massive boulder imbedded on the edge and from which one could dive into fifteen feet of water if so inclined, she was so impressed that upon returning to the house she claimed that she now suffered from “boulder envy”, a rather new and somewhat exotic-sounding mental state.

“It is hard to fail, but it is worse never to have tried to succeed.” Teddy Roosevelt ~