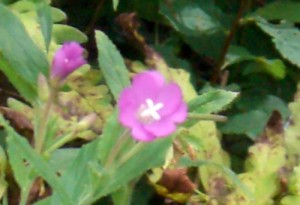 GesardiaSummer is almost over. The Joe-Pye Weed is nearing its end but there are still lots of flowers in the pink to purple colors. One of the prettiest at this time is Purple Loosestrife that grows in spikes. The New England Aster, daisy-like, with its yellow eye, and blazing star, small, mop-head flowers on 3 foot long, delicate leafed stems, Red Clover and tiny-flowered Gesardia, with their dainty, bell-like flowers. All are growing profusely along Route 28 and other roadsides. Queen Anne’s Lace and Goldenrod contrast beautifully and the pale bluish, New York Aster adds delicacy to the bouquet. In spite of the dry summer, they put on quite a show and are more dependable than my perennial garden, which has not performed well this summer.New England Aster

From the beginning of the season, the Lilacs did not bloom, nor did the Iris. Was it the lack of rain, the early hot spell followed by a late frost, or was it the fact that the bushes and trees have grown so much and shaded them? The Lilies did not seem as lavish as usual and the Peonies came and went quickly, as did the Azaleas and Rhododendron. The Poppies bloomed for such a short time that I forgot about them. 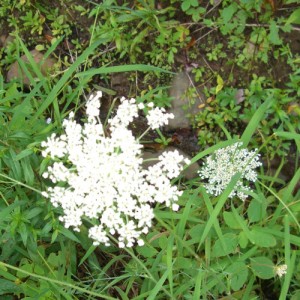 Last night we had a good, heavy rain and the grass, brownish all summer, turned a lovely green. Autumn Joy is getting its early, pale green flowers and it was a good season for the Hostas, which have finished blooming, but the foliage are even prettier than the flowers. (Notice the display in back of the library. This is their first season and already they are magnificent!) 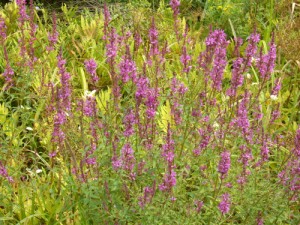 I’ve been cutting back on gardening chores and only grow what requires little care. Vegetables are happily situated in containers on the deck near the kitchen and near the water faucet, where they are easy to maintain and the sun is strongest. I can grow enough for myself and have enjoyed a freshly picked salad every night. Today, I picked the first of my small Green Bean crop. How delicious! Eggplant was not successful. Perhaps the plant is too attractive to chipmunks. I was so excited when the beautiful purple flower came and then the Eggplant itself appeared, but the next day a big bite was taken out of it and that was the end of that! There’s another flower now; if only I can keep the chipmunks away. Cucumbers have gorgeous yellow-orange flowers, but so far, no cukes. Tomatoes are still green but I’m optimistic. Will they ripen before the first frost?

The former vegetable garden is shaded by very rapidly growing River Birches. I love them, but next year I must try a shade garden there. Gardens are a constant learning experience! ~