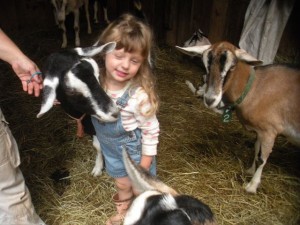 We need to tell you all straight off. Cyndi Wright, founder and operator of Dirty Girl Goat Farm, way up on Perch Lake Road, is not the dirty girl herself. Though she acknowledges she gets plenty grubby during the course of a day’s work. Jessie, her daughter, a pretty youngster with long blond hair who just turned 3 and couldn’t care less about girlie pursuits, is the namesake. She seems to live outdoors, often barefoot, mixing with the goats, the milkers and the babies and yearlings, like she was raised with them. And she was.

Cyndi, who worked in a gourmet grocery store in Piermont, Rockland County, for 10 years, and then, once re-located to this region, with Brian and Marcia Olenych of Mountain Flame in Arkville, installing wood stoves, is clearly in her element raising Alpine and Togg milk goats on their 3½ acre plot, with the assistance of her husband, Lester Bourke, landscaper. Cyndi started with 2 goats 5 years ago, and it just kept growing. Now they have a finished barn, and their operation has been certified by NYS Agriculture & Markets. They are currently milking 8. They pasteurize the milk themselves and cool it in a milk house to 35 degrees F. They house the young goats in a little structure built by Cyndi from plans she found in Mother Earth News.

Cyndi, charming and outgoing, would like to be open to the community, to share their mini goat farm with families with children who are interested in visiting. She intends to sponsor events in the future. 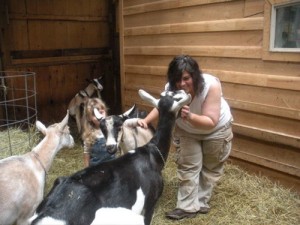 Cyndi tends to her herd

Who buys goat milk? It is particularly preferred by people with digestion issues. The FDA says it takes 2-3 hours for goat milk to be digested by a human being, whereas it takes 6-7 hours for cow milk. So people with Crohn’s disease, colitis, diverticulitis, or those who are lactose intolerant to some degree, find goat’s milk more easily digestible. Cyndi herself, when she had weaned her daughter from breast milk, wanted to offer her goat milk, as it most nearly simulates human milk and it is often sought for babies and small children.

The Grade A pasteurized milk is currently being sold at the Tremperskill Store, which is offering what they call a New England latte made with their milk, Hogan’s General Store, the Maple Shade Farm store in Margaretville, and most recently the Andes Farmers’ Market (where Cyndi was surprised to sell 20 gallons on Community Day weekend). They are producing about 6 gallons a day, and while they have no interest in selling far afield, can certainly accommodate more local buyers. The price is $4 a quart or $6 a half gallon. The goats eat hay and grain and live in a clean, sweet-smelling environment. The sire buck lives on a separate farm. When their goats are bred and bucklings result, they are sold for meat, usually to people with Caribbean or Italian background and to Muslims.

So don’t be shy: give Cyndi a call at 845-676-4000, and drive up Perch Lake Road, to #539, and see for yourselves how a small-scale local sustainable, natural product is being produced with great care and enthusiasm.~