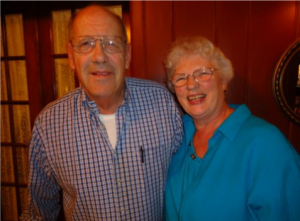 Mel Ruff now has time to watch the world go by from the front porch of his charming old farm house on Main Street where he and his wife June discovered an original mural painted by Andes carriage maker and artist Francis Heimer a hundred years ago.

He will be enjoying a well-earned rest from a lifetime of hard work. For 23 years, until April 1st, Mel delivered the U.S. mail 6 days a week over a route that defies imagination. At 6:30 am he drove to Delhi to fetch the bulk mail for Andes and Bovina, then drove back to sort, bundle and rubber band each patron’s mail and organize the bundles to exactly match his route. Out on the road, over Palmer Hill, past his boyhood farm, down to the New Kingston turn and back along Route 28 stopping at every mailbox.  If the mail exceeded the space in the box, Mel would cheerfully stamp to the door and hand it in with a smile.

At the junction of Route 6, he headed to Bovina and Russell Hill. Back up to Delhi, sorting and delivering mail over Route 28 and Lee Hollow. He had to get back to Andes by 4:30 to collect outgoing Andes and Bovina mail to meet the Binghamton-bound truck in Delhi. Arduous on a sunny summer day. “A struggle,” as June puts it, “when the weather was bad or it was a real heavy mail day.” Think just before Christmas driving through a blizzard to stuff stacks of catalogs, packages and cards into frozen mailboxes. Did I mention that Mel used a red van with a normal American driver’s seat and stretched his 6-foot-plus frame and long arms over the chassis out to boxes set at various heights and angles along his route? 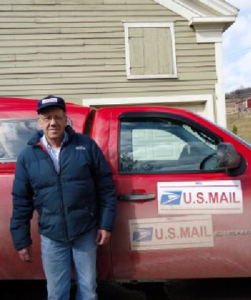 Mel was born in 1941 into two hard-working farm families. His father, Fred Ruff, bought the Roney farm at the top of Palmer Hill. His mother was Mabel Worden whose family had farmed the land just below for 155 years. With their 5 children, Mel’s parents milked both herds until the upper barn burned. Then they combined the herds and the land. Mel was the youngest, 20 years younger than his oldest sister Marge. A tragic memory was seeing his sister Carolyn killed by a horse when she was 10 and he was 4.

After graduation from ACS in 1960, Mel worked for GLF Feed in Margaretville. As a young man-about-town he squired girls to barn dances for an evening of square dancing. One momentous night he met a pretty, tall blonde named June Wright. The attraction was mutual. She confesses, “I couldn’t take my eyes off him.”  But, as each had come with a date, they had to wait to start courting. In 1966, Mel bought the Evert Close farm on Main Street in Andes and “robbed the cradle” by marrying June Wright on August 10th.

The couple farmed for 23 years. When the herd outgrew their big barn, they rented Walter Sprague’s barn down the street for the heifers. June says, “A dairy farm is a great place to raise a family…You are together and at home with the children, but the hours are very long and 7 days a week. The whole family helps, working together. Mel’s father, Fred, who had retired from the Palmer Hill farm, lived next door so he helped a lot, too.”

The Ruffs have 2 children: Jeffrey, born in 1972, is a chef and restaurant manager in Albany. Jennifer, 2 years younger, was previously a head college basketball coach in Kentucky. She is now a personal trainer, married to Tracy Osborne.

June, one of the 9 children of Edmond and Florence Edie Wright, also grew up on a farm. The Wrights lived on Terry Clove, one of those hollows where the land is in the Town of Hamden, the address is DeLancey and the School District is Downsville. She says, “You really got snowed in in winter; once for a whole week!” As a teenager, she raked hay with a dump rake pulled by a horse. Summers, she worked in Bovina resorts waiting on tables or in the kitchen, baking pies.

June is truly an artist. She loved decorating cakes and was much sought-after for her exquisite wedding cakes. June and Linda Van Keuren teamed up to start a wallpapering and painting business, “The Paper Dolls.” I can attest to the quality of their work. The paper they hung for the previous owner of my house is in pristine condition after 25 years. And because water damage necessitated some new paper and paint, I also know that they measured accurately, advised wisely and worked harmoniously, on time and on budget. They also did a lot of work for a P.R. company, creating photo shoots for catalog and magazine layouts.

In between running the household and a full time job, June worked with children as a Brownie and 4H leader, teaching sewing, baking and the art of creating displays. She served on the 4H Board, in the Fire Department Auxiliary and as a United Methodist Church Sunday School teacher.

Mel has been a Volunteer Fireman for 30 years. He drove the school bus, served on the Town of Andes Planning Board and is currently on the Zoning Board of Appeals.

Mel and June have already celebrated his retirement by taking their first trip to Florida to see family and friends, returning by way of Kentucky to visit Jennifer and Tracy. Mel hopes to see more ball games; June plans to quilt. You will see them taking their evening walk down Main Street to Ballantine Park and at country music concerts, especially when Robbie Laing’s Country Express is playing.

Mel married at 25, spent 23 years farming and 23 years as a mail carrier. We wish both Mel and June at least 23 more years of dancing, music and enjoyment of life among us. ~