The great news that everybody already knows about is that the DEP is going to allow paddling on the Pepacton Reservoir starting this coming Memorial Day weekend. What is kind of under the radar is the fact that they are also allowing the placement of hiking trails on their lands. The Catskill Mountain Club is undertaking this task and has begun with two local parcels: the Palmer Hill piece which is land surrounding and below the overlook at the top of Palmer Hill, and the Shavertown Bridge piece which lies just on the village side of the bridge. Both of these locations will hold a trail where families will be able to take a sylvan ramble right here in the Town of Andes. Eventually, it is hoped, work will also begin on the Flynn Brook piece which is 2200 acres and the completion of the Murphy Hill trail. These four are in Andes and only the beginning of what is hoped will be many throughout the whole watershed. If you are interested in helping with this effort or just interested in what the Club has to offer, check out the website at CatskillMountainClub.org. 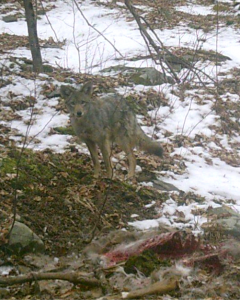 A coyote caught on camera

A while back I was venturing out on a trail on my back forty, cleared of a major blow down by my son and his girlfriend, when I discovered a mature doe that apparently was killed by coyotes two to three days prior. I am blaming coyotes, easy suspects, without knowing for sure they were the culprits, as deer and other animals die for many other reasons.  This deer was deep in the woods far from the road and of course it could have been struck, injured, able to move on and then susceptible to easy predation. According to the tracks in the snow it was being feasted on by coyotes and a bobcat, amongst other scavengers. It saddened me, as I think I knew this particular deer. It was in the vicinity where I had seen a doe on her own many times. She was never keen to run off when sighting me. This relative lack of fear could have been a major factor in her demise.

I went down and removed my trail cam from what was a relatively unproductive location and placed it on a tree overlooking the kill sight. Upon returning to the site four days later, I was surprised to find all the remains removed and, according to the trail marks in the snow, dragged in multiple segments up the hill to where there are many rock ledges and potential denning sites for bobcat and coyote. The pictures taken by the trail cam showed a multiple of daytime shots of a coyote standing above and viewing the kill and of an undetermined species of hawk also taking in the view.

Upon reading and commenting on the DEC’s plan to extend the trapping and hunting season for bobcats, I took note that they are planning to make the salvage of roadkill furbearers and birds legal. This will allow many of us who have great appreciation of our wildlife to take specimens that are killed on the road and are still largely intact and have them mounted by a taxidermist for display, or trappers to sell valuable pelts that otherwise would go to waste. The rule would mandate that the salvaged specimen be taken to a game warden for what they call “sealing,” ensuring that illegally shot specimens would not be claimed as roadkill.

As to the extended seasons on the expanding bobcat population, my comment was to be very careful not to allow over-harvest, as there has never been a negative bobcat human interaction reported and this rarely seen predator can have great importance in ecological balance. It is the only natural cat in the Catskills, at least presently. 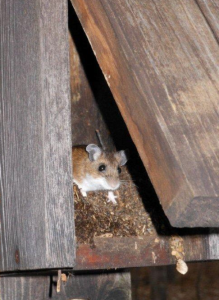 A mouse makes himself at home

Being that there is this very early spring and a minimal winter, I was not surprised when my neighbor Lesley at the bottom of our hollow informed me that on February 22 she had Redwing Blackbirds at her feeder and, sure enough, there was one at mine the following day. On the 29th there were seven Redwings and a male Grackle. My records from the previous four years show the dates of the Redwings’ return as March 1, 8, 9, 11, with the first Bluebird sighting being about 2 days later. I expect a flash of blue at any time. Of course, this thought has reminded me to clean out the 50 bluebird boxes for the returning migrants. In doing this, there is always the moral hazard of ejecting the field mice that have made well-packed, safe and warm havens of many of the boxes. Sending them scurrying to the safety of the nearest hole they can find and aware that at night it can still be below freezing does make me somewhat uncomfortable. I take comfort in that there are no young at this time of year and the fact that the natural world can be both brutish and pastoral. But no matter:

“Let us all allure the minds of our youth to an acquaintance with the wonders of nature”. ~