Anne Gohorel, textile designer and art teacher at South Kortright Central School, and John Gohorel, owner of River Edge Builders, have plenty on their plates beside bread. But since last summer when their bakery on Burgin Road (just 2 miles north of the Andes line) went into production, the married duo has risen to this new challenge of baking and distributing their artisanal bread with gusto. 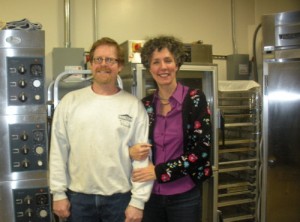 John and Anne Gohorel in the new bakery

John refers to it as Anne’s project. Anne, long a baker of bread as well as a full range of desserts and always intrigued by the magic of the transmuting process of bread rising and baking, is responsible for initiating the venture. And she designed the labels, sourced the ingredients and formulated the recipes, which she is continually tweaking, modifying and adding to. She also took a baking course at Delhi College to make certain she was knowledgeable about industry standards and knew what she thought she knew. She was and she did.

It turns out that John is a full and enthusiastic participant. He even took a King Arthur’s baking course in Vermont (see him wearing official baker’s hat in photo to the right). To start with, their state-of-the-art baking facility is a section of the massive, heavily insulated building designed and built by John’s company, the other section of which is his woodworking shop and office headquarters. He and Anne together researched, located and purchased the equipment for bread making: the huge Hearth Deck professional oven with its steamers and special controls, a double door refrigerator, banneton baskets, coiled willow cane molds for the rising of the dough, an 80-quart Hobart mixer, a bread slicer, a scale. He also had to deal with the electrical requirements of all this equipment. After some dimming of lights they realized they needed to install a 3-phase service and a transformer. Needless to say they passed the Ag and Markets inspection before officially launching their business in late August. John has plunged right into the baking process itself, and enjoys making local deliveries and interacting with growers and patrons at the farmers’ markets. 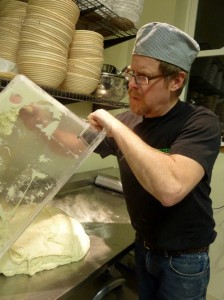 As of now, the breads, at least 2 varieties a week, are delivered on Fridays to Good Cheap Food in Delhi, Russell’s Store in Bovina, and to the re-opened Barlow’s General Store in Treadwell. They expect to join the Delhi Wednesday Farmers’ Market this year, and to sell again in Cooperstown’s juried Farmers’ Market. Their bread may make an appearance at the Pakatakan Farmers’ Market at the Round Barn in the future.

If this is the partly empty nest syndrome at work, we are all beneficiaries. Their daughter, Claire, whom many in Andes know as shop assistant first at Clementine and then at Tay Tea/Tay Home, is currently a senior at Brandeis University majoring in anthropology. The colorful tile mosaic above the long sink was a joint project of Anne and Claire. Their son Alex, an aspiring musician, works on music production in Brooklyn. When you read this they will have just returned from a family trip they took in late February.

The Gohorels have made appearances at many community events and festivals with their scrumptious, crusty artisanal breads: Bovina Farm Day, the Taste of the Catskills, the Bovina Library fundraiser, and the Delhi College CSA Harvest Dinner.

Some of the breads I have tasted and loved are the Olive bread, made with organic white and wheat flours, water, Mediterranean olives, sea salt, malt & yeast; and Multigrain Madness, made with all-organic wheat flour, cracked rye, flaxseeds, sunflower seeds, rolled oats, water, sea salt and yeast. Among many others, they have produced an orange rye, raisin walnut wheat, sesame semolina, and a panettone they put out at Christmas. None of their breads have preservatives or artificial enhancers added.

The yeast, as I understand it, is not a commercial yeast, but is a constituent of their starters which use the natural yeast in the air, giving the bread a special texture and flavor. Anne explains the pre-ferments, as she calls them, on their website: www.bread-fellows.com where you can learn more about their processes, their ingredients, the breads of the week, special events and sign up for their newsletter.

These two passionate devotees of good bread made it clear that they have no desire for their company to become a mechanized operation. They enjoy and value the made-by-hand quality they achieve, and do aim to increase their production, and even to sell at Price Chopper. (They’d have to figure out barcoding first!) They will continue to source locally grown quality ingredients; the majority of their flours are New York State grown and mostly organic. If Bovina and Andes farmers started growing rye and oats for flour they’d love to use it.

So, if you are a lover of this kind of bread, as I am, don’t forget to look for the Breadfellows label when you are out on a Friday or Saturday.~