I don’t like to rub it in but, for those who do not live in Andes, too bad, as where else can you get up in the morning and with coffee in hand watch from your kitchen window, two mature bald eagles cavorting in either a territorial dispute or maybe just a lover’s aerial mating dance? Well, I just did.

December 17th, a real good day, 27 degrees, slightly overcast, but no wind, an excellent day for a short hike and a replenishment of goodies at the trail cam site. A few apples applied, memory card replaced, cam left on, then across the creek along with the thunder of a flushing grouse a good sign for a productive hike. A very quiet day until near the top of my jaunt the faint honking of Canada geese. With a low sky ceiling I did not expect to see them but as they got louder, and louder I looked hard and finally they passed overhead winging their way to the southwest. Although late in the migratory season, at least in my mind, there were two V shaped skeins attached at their ends. At least 400 birds and probably more, a conservative estimate, the most I have ever seen at one event. 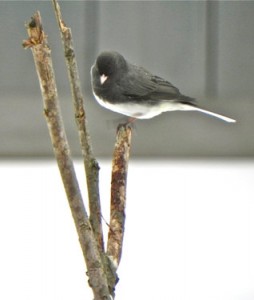 A junco poses for a portrait

Heading down the return trail, a small single bird flashed into view, not the normal ubiquitous black-capped chickadee, but the now more common ASUASB which is my acronym for “a small unidentifiable American song bird”. As I get older and my eyesight less accurate this little dude seems to become more common. Scat, neatly placed on stone, filled with hair and bones of many critters that succumbed to the predations of Wiley Coyote.

This hike culminates at the house where a few wife-requested outdoor tidy up chores are completed. With some energy remaining I activated the ATV to take a slow cruise up the hill on the other side of the road. Well bundled for the super cold, scented cigar in hand and cruising the seemingly desolate woods where there was no sign of life, but still enjoying the solitude, which is something I revel in, I finally spotted three deer heading down to the green grass and apple trees around the house, having made it through open season which will end in three days (black powder season being still open). The group included two mature does and a spike buck with tiny one and a half inch antlers that appeared to be still in velvet. I wished them luck and headed home in near frozen delight completing a very satisfying day in the woods of Andes.

Bears are in their dens, which could mean in close proximity, as a 500 pound bruin was found sleeping in the basement of a home in New Jersey, so I suggest stepping lightly over some unusual black lump in the far corner of your lower environs. Speaking of black critters, two black squirrels made a romp through the lower pasture which really surprised me as I hadn’t seen the melanistic phase of our gray squirrel in many years. For fans of the lexicon, melanism is dark coloration of the skin and fur due to a high concentration of melanin, and on the other hand a white but not albino (no pink eyes) squirrel is called leucistic. There is a herd of deer up at Fort Drum that consists of only white leucistic individuals. These two terms are used mostly by naturalists and interestingly my apparently backwards computer accepts neither word so I pressed “add to dictionary” – problem solved. 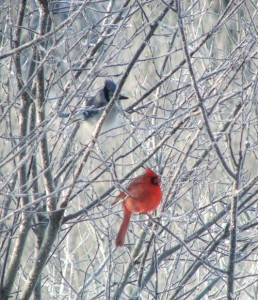 by my wife Nancy a few weeks ago have not been seen since. It could also be that of an orange-colored feral domestic cat that has disappeared from its usual rounds. The ruffed grouse, of which there are many this year, seem to be thriving under and around the low branched Norway spruce that I planted twenty years ago. The toll roads seem to have taken many, especially route 30 between the Shavertown Bridge and Route 28. For some reason many of them seem to be acting kind of stupid and using the roadways as strutting grounds and paying the price. Now that the bears are asleep the bird feeder is up with a gang of 15 bluejays taking preference as the other little guys, the chickadees, tufted titmice and juncos wait patiently for their turn. That is if the two red squirrels are not present. Take note of the following from the Cornell Laboratory of Ornithology: “A 1994 study found that predators probably do not kill any more birds at feeders than elsewhere. The most common predators at feeders were sharp-shinned and Cooper’s hawks, followed closely by domestic cats. Window strikes out-paced deaths from predation, highlighting the importance of good feeder placement.”

This from my friend Suzy, the horse gal; blanketing a horse is one of the worst things you can do to a horse in the winter. Horses have the ability to loft and lower their coats to 17 different levels. This self blanketing process works a little like chill or goose bumps do in our own skin. However – a horse MUST have a way to get out of the wind in order for their self blanketing abilities to function fully. Horse blanketing is very seldom needed – horse keepers, listen up.

Did you know that the Ulster County Treasurer paid bounties on nearly five hundred foxes in the year Nov. 1, 1910 to Nov. 1, 1911? This is from the Yellow Pages of the Walton Reporter.

“The earth does not belong to us we belong to the earth”. ~