We Others, by Steven Millhauser 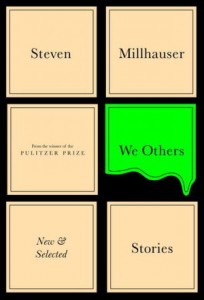 Millhauser often writes about magicians and illusion, but he is the great magician himself, taking the most ordinary situations and giving them sudden, often macabre, and unforeseeable twists that sometimes enchant the reader and at other times send chills and goose bumps all over the body. He is a master of illusion and reality with tales written in a cool, distanced manner that is dispassionate and nearly reportorial and usually in the first person so that readers feel the narrator really knows them and is confiding in them. And what he confides usually starts out with normal situations that at a very unexpected point turns into something out of left field–weird, eerie, shocking, startling, different– that leaves readers wanting more and more just to see what Millhauser can pull out of his imagination next.

His stories are not ghost stories, although one of the tales in this book is about a hereafter not like any other after-life themes I’ve come across. Nor are they horror stories, although he writes about fear and the unexpected things that can happen to ordinary people. For example, in the first story, Millhauser relates the strange tale of an upscale town in which the population is terrorized by a mysterious stranger who assaults several of them with only an unexpected slap in the face, a humiliating assault indeed. Most fascinating are the feelings of the townspeople who react as though people were being murdered. They try to protect themselves from what they have come to fear, and they fear it because they do not understand it. Additionally, the stories are not science-fiction, although in one, Millhauser describes an alien invasion off-the-beaten-track and basically black comedy. But he has also written about love, albeit in a fairy tale manner, reversing the story of the princess who must kiss the frog in order to turn him back into a prince who loves her. This fable is told by a man who meets an old friend and visits him and his wife to find the quintessence of love between them, and he mourns the fact that he never felt love and happiness like theirs. Yes, the relationship between husband and wife is most bizarre, but it is completely taken for granted.

Mostly Millhauser writes about obsession and couches it in Oz-like terms: he is very good at creating Emerald Cities with lush descriptive details but not like any that Frank Baum dreamed up although we know that most fairy tales have an underlying frisson if not outright streak of horror. And “dream” is the word for many of Millhauser’s stories because, like dreams, even the most unusual seem very real. He earned a Pulitzer Prize for his novel, Martin Dressler about an obsessed man who builds a phantasmagorical hotel in which people behave, taking it all for granted, as though they were strolling through the Waldorf Astoria or the Plaza in New York. His short story “The Next Thing” in We Others is about a company that builds a super shopping center below ground in an affluent John Cheever-like suburban neighborhood that slowly but surely takes over the population and all it possesses.

Along with the new and never before published stories, this collection also includes some from previously published collections such as The Barnum Museum. “The Illusionist”, one of the stories about magic included in We Others is among my favorites and was turned into an excellent movie some time ago. Interestingly enough it was released right around the same time as the film called “The Prestige”, also about magic and illusion. Both were very well received because, after all, who doesn’t like the mysterious, the turn of events that keep us guessing, especially when they are connected to things magical. ~