Recently I am finding that many more people are reading the Gazette and in particular my “Field Notes” ramblings than I ever realized. Many, if not all, expressed their enjoyment reading them. Thank you to all. Considering this, I feel it is time to ‘fess’ up and tell all who do not know me who I am and a little about me.

First I am neither a wildlife biologist nor a professional writer. I am a retired NYC Police Officer, living with my wife Nancy, a retired Flight Attendant for American Airlines, on 370 wonderful and biologically diverse acres on Bussey Hollow Road here in Andes just about a mile from the Pepacton reservoir. We purchased the old farm consisting of 235 acres in 1986 and were lucky to have an opportunity to purchase the 135 acres across the road a few years back. We have planted over a thousand trees, installed three ponds and miles of trails. We have taken down seven old buildings and built two new ones, including the house we live in now which was built of Catskill wood and stone by Catskill craftsmen. As you can guess, we are kind of proud of it. As far as writing is concerned, I think anyone with deep and abiding interests can write about them. I say to any kid in Andes school who thinks about writing, “You can!”

Let’s talk about Bussey Hollow fauna; cottontail rabbits seem able to withstand heavy predation as Nancy spotted one down near our pole barn and ironically a red fox a few minutes later in the same vicinity. Much luck bun-bun; you will need it. I feel that the many brush piles my son and his girlfriend have placed around the fields have helped the bunnies hide and escape from their two main predators: the coyotes and foxes. The red fox sighting was interesting in that they have been few and far between due to the dramatic increase in the coyote population. Coyotes are known to chase down and kill red foxes. Supposedly, they are unhappy with another canine predator in their territory. The gray fox often can escape because of their ability to climb trees, although I must admit to not having seen one in many years.

I will call it the “The Black Bear Escapade.” Nancy calls it just plain stupid. Preparing to leave to pick up a friend down the road to go out to dinner, Nancy spotted a bear crossing the lower field and got my attention. I immediately said, “Let’s go!” meaning, “Gather up your stuff and head for the car so that we can drive down to where that guy is going to cross the road!” We did and sure enough the bruin crossed where I thought he would, heading up to the recently harvested cornfield, which still held much corn on the ground. He ambled into the brushy perimeter and I ran the car up the muddy access road with camera ready and a wife yelling, “Are you nuts? We are going to get stuck!” Never mind, I wanted to get this shot but as it happened the bear never showed, staying under cover of the brush. We wheeled up to an old logging road that paralleled the cornfield and rumbled along to the other end of the field but the bear never showed. A very tight turn, a return to the muddy road, a very unhappy wife, no picture and a late pick up of our friend ended the drama. As it turned out, Nancy saw a second bear as we careened up the muddy road which would have made an easier photo shot. Ah well.

Not only have the bears wreaked havoc on the cornfield, they have been tearing down some of my bluebird boxes, especially the ones that are harboring mice as winter tenants. So far they have not wrecked any of our apple trees, as there are many apples on the ground so there is no need for them to climb and break branches, at least up to now. One did get a taste for black walnuts, and climbed a prize ornamental I planted twenty years ago that had for the first time produced a bumper crop of nuts, and in so doing decimated many branches on the main stem.

What makes a loud crash on the lower part of the house on a beautiful, calm, sunny morning?

There have not been many, but we have learned what a bird/window collision sounds like, so when Nancy heard a really loud crash on the 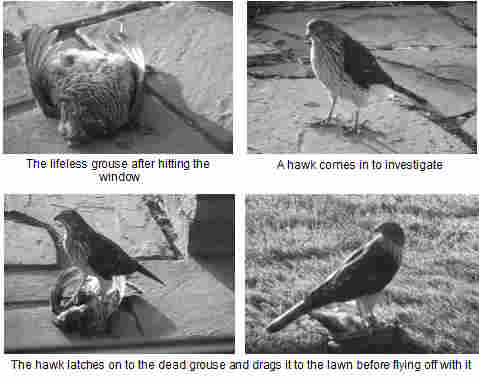 ground level of the house she grabbed her camera and quickly went down to investigate. Looking out a hall window she observed a grouse just outside the window belly up. She took a picture through the window of the grouse as a hawk came around the stone wall and pounced on its prey, talons in a death grip even though the grouse was already dead from the window collision. It held for a few moments, then lifted with its prey in its talons a few feet to the lawn, held again for a moment and finally lifted off to a nearby spruce tree. As all this was happening, Nancy was taking shots through the window. If you look closely at the pictures it appears that the grouse’s body weight was probably equal to, if not greater than, that of the hawk, which I find amazing. Of course the question remains: would the grouse have escaped had it not mistakenly taken the window as a path to safety?

I was not home when all this occurred, but looking at the photos I tentatively identified the hawk as a large juvenile Cooper’s hawk. I forwarded the pictures to three friends who are observers at the Franklin Mountain hawk watch run by the Otsego/Delaware Audubon Society who are competent birders, especially when it comes to hawks. All three agreed that it was as I identified it. Sure made me feel good.

As of now, there are two deer rib cages with backbones attached chained to a tree out at the end of my front field with the trail cam focused on them. Kris, my son, got both a doe and a 7 point buck with bow and arrow, down where he lives in Kerhonkson and asked if I would help butcher them. I would and did and laid claim to the bones for the trail cam set up. Why are they chained to a tree? I did this so that the coyotes and/or bears don’t drag them off and out of cam range. As of this writing, November 14th, only a mature red tailed hawk has appeared on camera although yesterday it was great to see a mature bald eagle watching over it from a tree across the field. It has not yet come down for a photo op.

The early bird may get the worm but, it is the second mouse that gets the cheese. ~