Richard and Diana Johnson, well known to many of our readers, live in the former hamlet of Tremperskill, across the road from the Tremperskill Store, a large row of solar panels bordering their prairie style stone and wood home, designed and largely built by Rich. He is the owner of Sculptural Furniture, whose remarkable machine and woodworking equipment populates his basement shop. 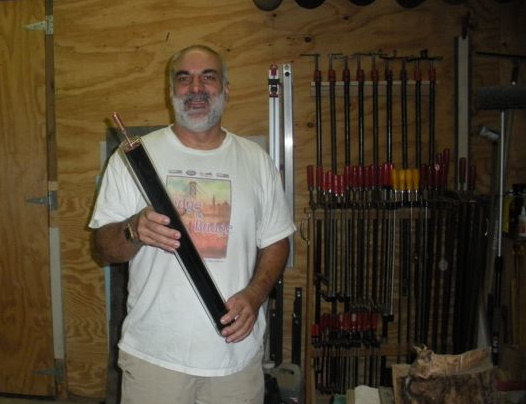 Rich offered me a clear and thorough description of how the solar thermal panels, now heading into their third winter, were designed to work. (Unlike photovoltaic panels, which store energy and convert solar energy into electricity, thermal collectors are used to heat hot water which constantly circulates through the system). They were set at an angle to optimize the collection of sun at the winter solstice, when heating needs are highest. The double insulated vacuum tubes with absorptive material on the inside which can weather temperatures to 30 degrees below zero were intended to provide heated water of 150-160 degrees Fahrenheit, the temperature required to be usable by the boiler that heats his house and shop/studio, with excess hot water going to their indoor swimming pool. He was hoping to displace 80% of his fuel oil use (the Johnsons also burn wood) but at present is able to displace about 20%. The reason? He installed a pump, piping and a 1,200 gallon below-ground concrete storage tank geared to the grand plan of having 2 rows of panels, but he hasn’t been in a position to purchase and install the additional panels. Learning as he goes, Rich is considering his options, which include creating a smaller storage tank which would allow the water to reach the required temperatures, while still using only the existing 9 panels.

Rich has much advice to give, some of it based on lessons learned, which he would be happy to share with anyone contemplating putting in a system, along with a look at his photos documenting the entire underground installation process. He has come up with some innovations of his own, one involving floating foam peanuts, which only he can describe! He emphasizes the importance of properly insulating the underground pipes (he has copper on the feed and plastic on return) running an anti-freeze mix, and using programmable thermostats. He recommends that a household start with a small project, such as a solar-powered well pump, or hot water heater, or the heating of a single room. Unless, that is, with qualified technical consulting and the ability to make a significant investment, they are prepared to go large scale. Radiant floor heat would be ideal for a solar powered thermal system, and, with heat exchangers in the plenum, one could even operate a hot air system. Of course, Rich adds, the dwelling should be divided into separate heating zones and well insulated.

We’ve all heard that the payback period for the financial outlay of installing a solar system, factoring in state, local, utility and federal incentives and rebates, is longer than we might like. In making a decision as to the scope of a prospective solar project, the homeowner will naturally consider his commitment to the environmental value of sustainable energy production along with his long-term goals for household energy efficiency.

I went to the Silicon Solar website, the source of the Johnsons’ panels, and noted that they sell solar well pump kits which they claim to be “powerful and efficient in addition to being both environmentally friendly and cost effective.” Their large solar pumps can be used for irrigation systems, stock animal feed and water transportation. Any Andes farmers out there interested? The company also offers educational solar kits and solar training seminars and workshops. 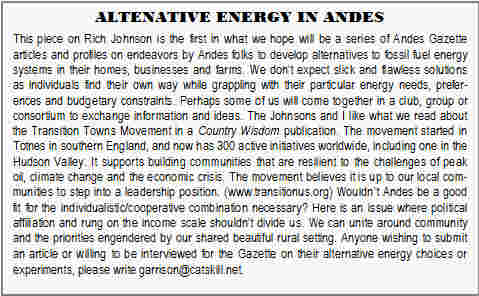