Since the deer are few here in Bussey Hollow I have focused my attention on a small murder of crows that attend to the few pieces of stale bread that are presented on the front lawn every couple of days. Yes, I did say a murder of crows. You might want to look this up if in doubt of my vernacular. Usually it means a large flock, but in this case it is two or three and sometimes four, probably a family group. I get a real kick out of the one I call the top dude (although it might be the matriarch), who is visibly and audibly upset when he arrives just after the crack of dawn and there are no treats. There he is: caw, caw, caw and some other strange guttural sounds that are hard to describe, marching around and looking up, seemingly demanding those treats from crow heaven. When treats are present and the others grab a single piece and take off, the top dude will gather a cache by assembling three pieces, one then two, placing them in neat order, and then off for the third which is added to the line-up. Using his beak he will hold two but has great difficulty grasping the third, but with perseverance finally holds all three, and then with great aplomb lofts to who knows where. I always wonder where, and if he lands on a branch to feast it is certain a couple of pieces will fall to the ground. But I am sure this smart dude has that one figured out.

Speaking of crows, if there are nine of them lined up on a fence and a cat, not a mountain lion, leaps up, grabs one and eats it, how many are left? The answer may surprise you, answer at the end of this discourse.

The fall migration is in full swing with a plethora of migrants passing, resting, feeding and some bluebirds checking nest boxes possibly for use next spring. A few days ago the front lawn was hosting at least a dozen yellow-shafted flickers, a very regal looking woodpecker that spends most of its time on the ground seeking nourishment. After many days of rain there was a much-needed bright sunny day. By late afternoon there were many species of birds flitting about taking advantage of the dry respite, many of which I could not identify. A multiple of warbler species when migrating in the fall are all called “fall warblers” as they are very difficult to separately ID. On this particular afternoon, mixed in, just to make it more interesting, were what appeared to be a variety of vireos.

I was delighted the other day to see the return of Prince Charming, a really cool duck that appears to be a cross between a mallard and a ruddy duck, his great white chest, green head and ruddy colored body, dabbling about in all his splendor. At first it appeared that he had a harem of three female mallards, but on closer observation one of the three was a male, so philanderer he is not, at least not presently. He has been returning to the ponds now for five years, a resilient dude.

I don’t know if any of you know the song, and mentioning it I am dating myself, by Gordon Lightfoot. “The First Time I Ever Saw Your Face” where he sings of ‘the trembling heart of a captured bird’. Well I thought of these words as I observed a female sharp shinned hawk take down one of the local phoebes in one quick aerial swoop. Landing on the lawn thirty yards away, she held its fluttering body and, I am sure, a ‘trembling heart’, with spread wings for balance, talons clamped in a death grip she awaited the cessation of the fluttering, all the while looking around for a potential thief. Finally, she flew over to a fence post, dead phoebe in tow, where the feather plucking and feasting took place. I was saddened, but I reminded myself that I was lucky to observe at very close hand a scene most often unseen, one that is played out in the natural world on a continuing basis. For there to be life there must be death, and we must find this acceptable. What I do find hard to accept was the beautiful deep red and black body of a scarlet tanager, vehicle struck, lying unnoticed by the side of the road.

A partridge, usually thought of as being in a pear tree, or actually in the deep woods, has found a new home in the front yard of Bill and Eddie Piervincenzi’s house and barn. Not only does this seemingly demented bird hang out in close proximity, but follows the two of them around and 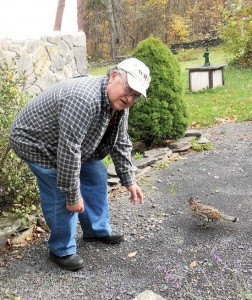 Bill Piervincenzi with his new friend

actually flies after them for a short distance when they are in their car. This fixation on, or attachment to, them is weird as they were not present at birth (hatching) when what is called imprinting might occur. There was a case reported in the NYS Conservationist magazine where a partridge, normally a very easily spooked bird, greeted and followed a bowhunter to his stand and stayed with him in the stand. This interesting behavior is tough to figure out.

On the use of hounds to run and harass bears that are causing major damage to local farmers’ cornfields, I contacted Larry Bifaro, the bear specialist at the Department of Environmental Conservation in Stamford, and he laid out for me the rules that exist for the houndsmen. They can run the bears on the property of the farmer, and if the farmer, under extreme circumstances, is issued a ‘kill permit’ they can kill the bear, but only on the farmer’s property. If the bear takes to a tree on an adjacent property it is not legal for them to shoot the bear. All kills must be reported to the DEC within 48 hours and only the meat may be taken. The fur and head (trophy stuff) must be turned in and then is disposed of by the DEC. Most of the hounding takes place now when the bears are very active feasting on hard mast (acorns, beech and hickory nuts), apples and of course the succulent corn, fattening themselves up for their long winter denning.

I read somewhere that sub-adult bears 2 to 4 years old are like teenagers that get into trouble because they are trying to figure out the world and their place in it.

“It is not the strongest of the species that survive, nor the most intelligent, but the ones most responsive to change”. Charles Darwin. We sure have changed the bear’s world.

Answer to the crow question – zero, as crows are smart and the rest will have quickly flown off.