WE APPLAUD: Lissa Harris and Julia Reischel of The Watershed Post 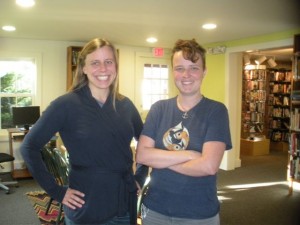 Amiable, Nerdy, Dedicated, Efficient and Smart (notice the hidden Andes acronym) doesn’t even begin to describe these founder/directors and their recent work through their online magazine/blog during the flooding from Hurricane Irene. Many of us followed the succession of videos showing scary washouts of cars, trees, and entire houses in Margaretville, Fleischmanns, Arkville, Phoenicia, Prattsville and Windham. Lissa, Julia and their ad hoc assistants had to engage in a dance with moves alternating between the ideals of swiftness and accuracy, moderating the myriad entries as they poured in, while allowing vital information to get out to a bewildered and frightened public in real time. I knew I wanted to acquire a first-hand, in-person account of their experiences for The Andes Gazette.

Julia and Lisa explained how the Watershed Post (WP) site (www.watershedpost.com), covering the 5 counties within the New York City Watershed, was able to step up to the plate for Hurricane Irene on the weekend of August 27th and 28th, with functions it hadn’t previously offered. The smaller flooding crises of last fall had provided a kind of practice run during which they learned how to solicit photos and videos, and how to divide the region into both towns and neighborhoods for reporting purposes. Lissa realized on Saturday, the 27th — when it was still not clear where the hurricane would hit and whether to expect heavy winds or rains — that the “Cover it Live” software she had a bit of familiarity with, would be suitable, as it allows people to follow along with an event, can pull in information from Twitter, and is a good way to garner tips.

Taking the bull by the horns, the women subscribed to the free version that day. By the middle of the day on Sunday, 2,000 people were tuned in at any given moment, with 60,000 unique visitors on the site for the day. With no existing regional news outlet for the Catskills, nothing really comprehensive, TV channels unable to find their way in to report, and buildings that house dependable news sources now inundated with water and out of power, the Watershed Post was able to take on a central role. They could allow Twitters and videos shot by locals in their neighborhoods all over the region who would sometimes be the only witnesses to unmarked ravines and other dangers on washed out roads. An unanticipated side benefit was the camaraderie the site provided as people heard from others and knew they were being listened to and helped whenever possible.

Julia and Lissa filled me in on the “back story” of a vivid and professional interview between them I’d heard on WIOX, Roxbury’s community radio station, which included speaking with Gov. Andrew Cuomo. On the Wednesday after the flooding, Lissa had set up an interview from home, mediated by WIOX, with videographer, Jessica Vecchione, who was in Margaretville. Julia was away, having driven to the Oliverea Road in Shandaken, to be embedded on an All Terrain Vehicle with a Department of Environmental Conservation officer, so that she could later report on those people trapped and isolated to enable help to arrive. And so Lissa was stunned when Mike Teitelbaum, commentator at WIOX, announced that she would be talking with Julia, who had, unbeknownst to Lissa, unexpectedly turned up at the Roxbury studios. During the three-way conversation, Jessica, on the ground in Margaretville, handed the phone to Gov. Cuomo, whom someone had recruited to the mike, and the radio audience heard a seamless interview.

Among those the women credited with extending themselves in getting out information to those trapped and needing to discover safe routes for travel was Jim Gibbons, one of their 10 dedicated volunteers during the 11-day crisis. Confined to a wheelchair with a debilitating illness he worked 2 daily shifts, including 11-1 a.m. for the WP as a live blog moderator and commentator. They lauded his calm competency and sense of humor. Another was Don Meltz. Through his work experience with Geographic Information Systems (GIS) and his current connections with the office, he was able to disseminate real time road closing information, something lacking on other emergency sites.

I asked how many mentions The Watershed Post received in other media. At least 10, they said, including NPR’s All Things Considered, Pacifica Radio’s Democracy Now (I heard Lissa being interviewed) and The New York Times. And FEMA called them!

Other innovations: Julia developed a Google document spreadsheet for stranded people, listing relief organizations which she had vetted. And Ivan Lajara at The Daily Freeman helped them place a “window” on the site in which to look at road closing information. Multiple people can contribute and as it is continually updated, the information is never old. Moreover, other sites can share the same portal. The process allowing multiple contributors to a master document that can be updated in real time makes sense as a tool for the future — for our town governments, for instance.

Just as water seeks its own level, talent finds its pertinent uses. During the flooding crisis, the talent, innovation, and hard work (despite sleep deprivation brought on by an overwhelming sense of responsibility) of these two was clearly well matched with the unprecedented needs that surfaced. The Live Blog, which ran for 11 days, is now archived on the site, and they will officially subscribe to “Cover It Live”.

Lissa, Julia and their daughter Ruby will be moving to New Kingston in November, but they will still have a strong foothold in Andes. We are so proud of them and their work! ~