It all began when my friend and I (alias Thelma and Louise), were on one of our weekly “get lost in the country” driving adventures. This particular week we were exploring Walton and ended up at Jake’s Place where I bought two adorable Cochin Bantam chicks. No surprise, I named them Thelma and Louise, but that was before they grew up to be Thelmer and Luigi. All I wanted were a few fresh eggs, and I knew no eggs would ever be laid by two roosters, so I began buying pullets. 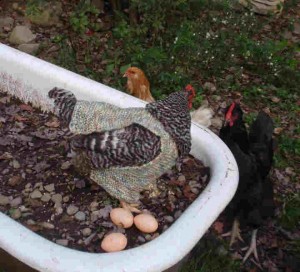 There are many breeds of chickens, each one more beautiful then the next. You know “a chick-chick here, a chick-chick there”. One adventure in the country changed my life. I now have 24 chickens clucking in my field and gardens, Golden Lace Wyandottes, White Silkies, Americanas, Rhode Island Reds and Barred Rock, just to name a few. As my chickens matured I realized that only 6 out of the 24 were hens. This was the number of poultry I had left after my Standard Poodle, Calee, decided to have a few chicken dinners. Now any farmer, neighbor or hen will tell you that one rooster is more then enough. Just ask Henrietta, poor sexy chicken. For some reason my huge Rhode Island Red rooster, Henry, is infatuated with her. I watch him chase her round and round the field, catching her and doing what roosters do best. When chickens mate, the rooster mounts the hen’s back and holds on for dear life with his beak, feet and spurs. After a few matings, it’s no surprise the poor hen has no feathers left on her back. I was left with a naked hen and one love-sick rooster.

Patsy, my neighbor here on Dingle Hill, was experimenting with various capes and covers designed to protect his hen-pecked chickens, without much success. Then, one day as I was browsing through my chicken magazine (yes, I read chicken magazines), I came upon an article about a chicken rescue organization in the UK. It seems they had rescued a bunch of hens that were completely bare of feathers. Some kind soul with imagination decided to knit them jumpers (English for sweater). I emailed them for the directions and got right to work knitting a jumper for Henrietta. I had to be careful to use the right yarn. Anything shiny or fringed would attract the eye of the other hens and cause them to single out Henrietta and pick on her. Yes, competition is keen in the hen house. The sweater had to be washable as well, because one of the greatest joys in a chicken’s day, besides eating, is taking dust baths. I have an old claw-foot bathtub filled with dirt, kind of an amusement park for chickens. It is intended to keep them out of my flower and vegetable garden. But that’s another story.

When the sweater was finished, I waited until all the chickens were in for the night, got my flashlight and made my way down to the coop to dress the unsuspecting hen.

Now, Henrietta is very proud of her sweater feathers. She struts around the yard and rewards me with a fresh egg everyday. With winter coming I’m thinking of knitting sweaters for the other 17 hens. Tammy Wyandotte, Silkie Momma and Noodle are on the top of the list. I might have to expand my line to include raincoats and boots. Coco Chanel, eat your heart out.

With all the money I have invested in the chickens, their coop, their food, their sweaters and the electric fences, my eggs should be selling for $50 a dozen.

Forget about winning the lottery; I am going to make my fortune selling chicken sweaters at Tractor Supply or on Ebay. I may become the Donna Karan of chicken wear. Be sure to watch for the chicken fashion show at the Delaware County Fair next summer.