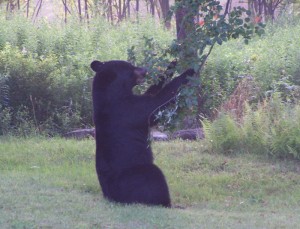 A black bear settles in for a berry feast. Photo by Doris Hartung

In my past article for the Gazette with a deadline of August 15th and for an issue coming out on September 1st, all that was written may have seemed mundane considering the catastrophe of August 28. This issue will be coming out on October 1 when much will have been written about it and its aftermath, and hopefully the generous outpouring of neighborly help in the myriad of ways has not ceased.

Having said that, I will write about what is my keen interest, the outdoors and the natural world. How animals, both domestic and wild, react and pre-act to a storm of this magnitude is a phenomenon that often catches the eye of pet owners and nature observers alike. Dog and cat owning friends have watched their beloved pets acting in sometimes strange ways a day prior to a storm hitting. Whimpering, whining and a general uneasiness is often exhibited, some saying that it could be a drop in atmospheric pressure that brings about this apparent prescience. It could be something else; I do not know, but it does remind me of a story printed in a scientific journal about a cat that was domiciled in a nursing home. It was noted that when and if the cat walked into and remained in a particular patient’s room, within a day that patient would pass away. I find this animal/human interaction very interesting and somewhat unnerving;. Please, no cats in my bedroom.

It sure seems as if nature has no moral code (a strictly human structure), is unfair, and can in human terms act without mercy. Aside from the monumental human tragedy, there must have been much unseen havoc and loss in the natural world; dens and safe havens washed away including the wild inhabitants themselves. On the day of the storm itself, with the torrential rain and high winds on a continuous non-stop run, the fields and hillsides seen from my vantage point which are normally teeming with a variety of avian activity were totally bird-free. It seemed all critters furred and feathered had hunkered down somewhere they considered to be safe haven. To counter this, a friend reported that activity at her hummingbird feeders remained throughout the day with the usual aerial acrobatics, combat and territorial rivalry, although with a little more than usual respite time of fluffing and feather gleaning. There were many large mature trees uprooted, (this is called wind throw by the forestry community), and often, as they came down, felled others in their path. Clearing these trees can be very dangerous as they can be under very strong and unknown tensions. Proving this, two local guys have been severely injured in this process.

On the subject of our black bears, a couple of weeks ago Nancy said there was a stray dog outside and to check him out. I went out and was met by the friendliest dog ever wearing three collars, two bright orange and one blue with what appeared to be a small radio antenna. A short-haired German Pointer type was so excited and enamored by my presence that initially I could not get a close look at the collars to determine ownership. Eventually we got him settled with some treats and tied to the porch railing where Nancy was able to remove a collar with the name and number of the owner. I called and got his wife who seemed not overly concerned and said that eventually her husband would arrive to pick him up. He did, a number of hours later, and when asked if he had been sent by his wife he said no and that he located the dog by the radio tracking collar. As it turned out he was a houndsman, as they are called, people who train hounds to run bears, particularly nuisance bears, and in this instance he was heeding a call from my neighbor who was having his corn fields damaged by marauding bears. Before this incident I never liked the idea of running and harassing bears with dogs. I now understand that it is an effective, non-lethal tool, used to persuade bears to avoid places where they are not wanted because of nuisance and or destructive behavior. Better the hounding than lead, the lethal alternative. As the owner left with his hound dog he said he had to get up into Wolf Hollow where another hound was still on the run most likely on the trail of a harried, but still live, bear.

According to a DEC report Cornell scientists have begun two black bear research projects in the western part of NYS on both state and private lands. They are collecting hair samples by using barbed-wire corrals and will use genetic techniques to identify individual bears from the hairs collected. Also, they have fitted 20 bears with radio collars that send the researchers hourly text messages with a GPS location of the bear. The projects are expected to provide information on black bear populations and will assist in developing effective management strategies for the expanding population. Specifically, the projects will generate an estimate of how many bears exist in the study area and will provide an understanding of where bears spend time and how they move.

My trail cam has been moved to the other side of the road at a confluence of four woodland trails above four acres of cornfield and up to the time of this writing has recorded raccoons, turkeys, porcupines, coyotes, deer, and one gray squirrel, but nary a mountain lion!

“If we were to disappear nature would quickly reclaim every place we call home.” Olivia Judson, NY Times