The Paris Wife, by Paula McLain

Ms McLain gives us the young Ernest Hemingway told from the point of view of his first wife, Hadley Richardson.  I’m glad 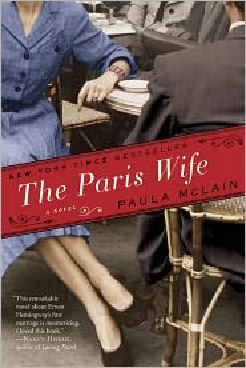 this is a novel so I can continue my fantasies of Hemingway as a man with a code of honor I deeply believed in when I started reading his books as a teenager.  He doesn’t come off as such a wonderful person in this narrative, although he was clearly caught up in a world of frenzy in which Hadley had little experience.  But here and in other countries they visited is where Hemingway and many other great writers of the so-called Lost Generation honed their skills and produced iconic works still read today, such as The Sun Also Rises and The Great Gatsby.

McLain beautifully relates the courtship of the young couple and evokes the giddy days of bohemian Paris where Hadley and Hemingway lived until they split up five years after their marriage.  She talks about the clothes, the jazz music, the heavy drinking, the weird relationships, and the company of the great writers such as F. Scott Fitzgerald, John Dos Passos, Gertrude Stein, Sherwood Anderson, Ezra Pound, the journalist Lincoln Steffens, and many others who found Paris after WWI an exciting place to live and write and love in. But it was also frantic with a great sense of carpe diem, meaning “seize the day”, which most of them did with impunity. Except, to a great extent, Hadley, who was somewhat bewildered by the milieu.  She says that she “wasn’t remotely elegant and didn’t feel I belonged in Paris at all.  If the women in Paris were peacocks, I was the garden-variety hen.”

At one point in the narrative Hemingway, often depressed with memories of the horrors of the war in which he was wounded, tells Hadley that he wants to “write one true sentence. . . .If I can write one sentence, simple and true, every day, I’ll be satisfied.”  Of course he went on to write many books filled with his “true” sentences based on his experiences as a correspondent in war and in Paris and beyond.  He was strongly influenced by Gertrude Stein, although he didn’t exactly approve of her relationship with Alice B. Toklas, telling Hadley, “Women together.  I’m not sure I buy it.”  Considering his future life with other women while married to Hadley and how he saw marriage, it seems quite hypocritical.  Some years later, he meets Pauline who became his second wife.  Before his divorce, he has an affair with Pauline and wants to make her part of his marriage with Hadley, a ménage à trois, a not uncommon practice among their married friends who have many affairs, the women sometimes having babies with other men.  Hadley’s reaction is to say to Pound’s wife, “I don’t understand marriage this way at all.  I suppose I am a Puritan.” She tries, seeing that her friend works impossibly hard at it but it leads to the downfall of her marriage, despite the fact that she and Hemingway have a baby boy who is hardly mentioned in the book.

The great strength of this book is Hemingway’s development as a writer.  McLain depicts him as a driven man obsessed with molding his war experiences, his adventures such as the bullfighting in Pamplona, and his relationships into a personal code reflected in everything he ever wrote.  Additionally, the italic sections dealing with the war in Turkey and Hemingway’s coverage of it is very powerful both for what effect it had on him and in the actual writing by McLain. McLain also does a good job of bringing that crazy world in Paris to life, offering thrilling glimpses of the way the writers and artists lived the bohemian life abounding in the 20s. The problems in the novel as I saw them were the lack of Hemingway’s “voice” when he speaks in the book and the sad, sorry picture of Hadley who didn’t really have the strength to stand up to him.  She says herself that “Marriage could be such deadly terrain.”  There were times when I wanted to yell at her—“Get rid of this man!” —yet I hoped she was stronger than she seems to be in Mclain’s fictionalization of her.  But then again, it was a different time, a different age. ~