Just before 7 pm on Friday, August 19th , the bleachers thumped down to accommodate the crowd which overflowed the seats set up on the ACS gym floor. The occasion? The Fracking Forum called by Andes Superintendent Marty Donnelly and the Town Council. Marge Merzig, a consultant to the Town, outlined the format for the evening: First, a presentation by William M. Kappel, a hydrologist with the U.S. Geological Survey, on the facts of drilling for gas in the Marcellus Shale formation; next, a Q and A session with him; and last, a period of 3-minute comments by those who had signed up to speak. 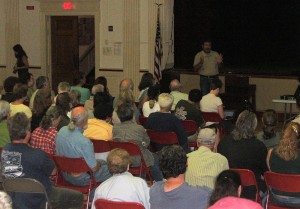 William Kappel of USGS explains the process of fracking

Mr. Kappel, an engaging, energetic speaker, presented an illustrated lecture on the history and geology of the gas formation under a wide swath of West Virginia, Pennsylvania and New York. He then described a 20-year-old technique of drilling deep into rock to a seam of black shale thousands of feet underground, canting the drill hole until it thrusts horizontally into the seam and then forcing a “witches brew” of water laced with chemicals at high pressure through the shale to open fissures that release the gas stored there.

The flow-back water, now contaminated, must be disposed of; the gas pumped into a “spider-web” of pipes to a compressor station.

The process of drilling the wells, at a cost of $2-3 million each, requires a 3-5 acre well pad on which several wells can be drilled in succession. The heavy equipment and chemicals are trucked to the site. Local water, if available, or a trucked-in supply, is pumped into a “source pond” and the effluent stored in a dirty water pond until trucked away. Hundreds of truck loads are required to drill and keep the well running throughout its useful life, perhaps a decade or so. Mr. Kappel spoke of “incessant traffic by heavy trucks.”

The sources of the millions of gallons needed for each well are municipal water supplies, surface water from rivers, lakes and streams, or underground aquifers. The problem of the disposal of the “flow-back,” polluted water is still unsolved. The speaker ruled out Waste Water Treatment Plants as a solution (although DEC has not). Right now, Ohio is allowing the injection of this water into its bedrock.

The NYS Department of Environmental Conservation (DEC) has promulgated rules to monitor gas drilling in the state. We are in the 60-day window of public comment before final regulations are prepared. At the moment there is a moratorium in place.

Mr. Kappel pointed out that the NYC and Syracuse watersheds are exempt from drilling under the proposal on the grounds that they are sources of unfiltered water. However, in answer to a question, he said that gas companies could buy water from the watershed and cross the area with pipelines.

He noted that under Article 23, NYS law supercedes all local law in major areas except the use of local roads and zoning. The recourse a community like Andes has to influence decisions on drilling in the township is to speak to our legislators and the Governor and to craft local ordinances in concert with the Town Council and Supervisor.

Mr. Kappel held the floor until 9 pm and left to a round of applause.

In the open comment session 25 speakers covered a gamut of concerns. At the outset Larry Breakstone, Michael Suchorsky and Bob Lidsky set the tone by thanking Marty and the Board for holding the forum and voicing well-articulated, deeply felt concerns about the effect of gas drilling in Andes and environs. Every speaker raised a new aspect of the issue: the millions of gallons of water deliberately contaminated in the process, constant heavy truck traffic, the potential pollution of local water supplies, the introduction of heavy industry and consequent lowering of property value on both leased lands and those of their neighbors.

Suzanne Gladstone read from the Comprehensive Plan created and adopted by Andes Town and Village ten years ago. Laurie McIntosh led us in an original song celebrating Andes as a “nice place to raise a family.” Jack Doig took a vote. “How many here live in Andes?” About 80 percent raised their hands. “How many want fracking?” No one.

People gave vivid factual accounts of small towns in Texas and Pennsylvania where fracking caused pollution and illness. Vera Liddle raised the probability that fracking will come, given that two well sites are located in the southwest corner of Delaware County. We should prepare. Jeffrey Ashton said that he had brought his 12-year-old son, Ethan, to the meeting to hear what a concerned community sounded like. He and others urged us to think of the heritage we leave our children. Fred Cubero reminded us to go to Town Council meetings and be heard.

Towards the end, Ruth Hardinger, a neighbor from New Kingston, Laura Nathanson, a weekender, and Zoé Randall, a full-time resident and businesswoman, all emphasized that we have a big fight on our hands. This is only the beginning. Every speaker was applauded.

Ms Merzig announced that draft legislation should be ready for the next Town Council on September 15 at 7:30 pm. The crowd applauded her handling of the meeting and broke into small groups that lingered long after the 10:30 pm close. ~