From September 1911 issues of

The Village Improvement Society at a special meeting last Friday evening voted to install three of the boulevard lamps in different parts of the village, to be located as follows: One to be on Railroad avenue, a second near the second bridge on Delaware avenue and the third on upper Main street, to light the darkest spot in the village. The village trustees will also put in three or four of the lamps.

New Gas Lamp Sheds Its Rays on the

Tuesday a Boulevard Arc light of 1,500 candle power was set up at the corner of Main street and Delaware avenue to give it a trial, 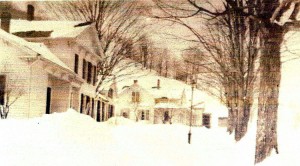 and it was used that night.  It gives a fine light and if it proves satisfactory after it is tried out, the entire village will probably be lighted with them.  They are extinguished automatically and can be set to burn any length of time.  They are made by the American Lighting Co. The present street lights are of little value and the yearly expense is nearly $200. [Jim Andrews: This answers my question about what those “other” poles were that show up in pictures.  These gas (probably of carbide origin) fueled lights were high up on cast iron poles which had access doors at the bottom to enable someone to tend to and regulate the gas.  I would imagine that they burned very hot and were situated high up to prevent little fingers (or stupid adult ones) from getting burned.  One such post still exists, although it is not in its original location. The pole currently sits in front of the “Delaware Trading Post” next to “Tin Horn”. Anne Geiger erected the pole and topped it with an 1880s lamp. Although historically the two didn’t belong together, they made an attractive combination. She told me she bought the pole from Stew Ford who had used it at his camp on Silver Lake. I remember two of them being used in front of the Ali Inn back in the 1950s and which had been electrified. The picture shows one in front of the remains of what I believe to be the Turnbull hardware store fire. (The other photo is taken in front of the former Floyd Liddle house on Delaware Ave. It’s a little harder to see. Tink (Floyd) Liddle found the cut stone base to that lamp when they excavated for a new water line and it still sits in front of the porch 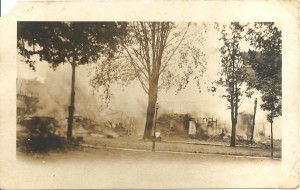 with a cast iron kettle of flowers sitting on it.)

Mrs. Wm. L. Gill is in New York this week securing her stock of millinery goods. She is accompanied by her son, Irving. [JA: Mrs. Gill’s millinery shop was in the lower half of the old post office building.  She lived upstairs over the shop. The Gills owned the lower half of the building and the Millers owned the upper half where The Andes Recorder Office was located.]

A tower for drying the hose has been erected this week at the rear of firemen’s Hall. [JA: The tower can still be seen at the rear of the old fire hall, now the ASHC Thrift Shop. The large hose wheel is still intact in the attic.]

The work of putting in a new bridge across the Tremperskill at Mrs. David Muir’s was begun Thursday. The old bridge, which had only been put in about five years ago, went down recently with some cows on it. The span is 40 feet and it is on “Bullet Hole” road. [JA: That was located on the Geiger farm and crosses a wide portion of the stream. The Bullet Hole stream comes out right there—the old railroad trestle crossed the valley just up hill from this bridge.]

Stores now close at 8 o’clock {Sept. 29 edition}. [JA: Interestingly, they were open later than this earlier in the summer. Probably because it was getting dark by this hour and lighting being what it was in 1911, people wanted to be home by then.]

September 1, 2011 Featured, Jim Andrews, Judy Garrison, The Way We Were,