A few years ago I wrote about our “Toll Roads”, meaning the toll that our roads take on wildlife which is very, very high. Most of us, as we drive along, take care to avoid that “mess” on the road so as not to bloody our precious vehicle or immerse it in the perfume of a skunk or rotting flesh. Most critters are killed instantly when struck, but sadly many are injured and repair to the forest for a slow and agonizing death. This was not the case when a friend struck a deer that was bounced into the roadside ditch and was struggling with broken legs and internal injury. I happened to be coming by in the opposite direction and was asked if I had my gun (retired PD) and would shoot it. As I am not armed when driving about, I retrieved my buck field knife which I keep in the car for just such an occasion and with the help of a woman friend held it down and dispatched it with a very quick slice of the throat. Mercifully it was over very quickly. 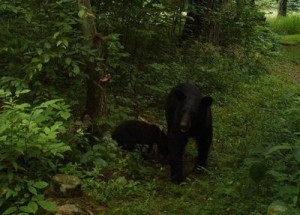 Some things should be made clear here: it is illegal for a civilian to shoot a deer even under the circumstances described above, and it is also illegal to take the deer. The law requires that the police or local game warden be notified and that they do the dispatching and, if the carcass is desired, a permit will be issued by either the police or the warden. In this instance the deer was placed in the back of my car, driven home and field dressed under my new trail cam, which is mounted on a tree on a trail in the woods far from the house. The plus side of the removal from the side of the road is the fact that remaining there it would attract scavengers and possibly produce more carnage. There is much illegality here: the dispatching, the taking without a permit and the placing of the entrails in the woods (wildlife, possibly a bear, feeding). I do believe and would hope that under the circumstances a rational police officer or game warden would overlook same, and instead give me a warning. End of story except for the trail cam images. 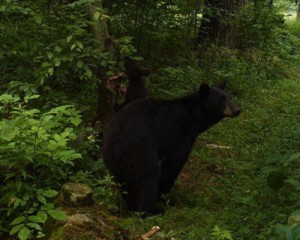 The deer population has been taking a number of hits lately beyond the “toll roads” and a couple of severe winters. Nature has been doing catch up by adding two very efficient predators to replace the wolves and mountain lions which historically roamed our woods and which we extirpated. The ever-expanding numbers of black bears and coyotes are major controlling agents of the deer herd. Two incidents observed by two different people caught the predators in action. A woman friend told of observing a doe with a nursing fawn and out of the corner of her eye saw a coyote also in the act of observing same.  When the doe left and the fawn hunkered down, the coyote raced to the scene, grabbed the fawn which let out a short bleat and was gone into the woods with its prey. Another friend watched a bear sweep through a field with nose down when it too captured a sequestered fawn. What I find interesting is the two different hunting methodologies used by these predators, the coyote using keen observation and the bear its superior olfactory senses. It is a known fact of wildlife biologists that the coyote, although with a sharp nose, will occasionally walk past a fawn which is thought to have little or no scent, whereas a bear on

the other hand will sense and take it just about every time.

Update on the road kill issue: I had a phone conversation with our local Encon officer (game warden) Vern Bauer who stated that it was not only illegal to take the carcass without a permit but it was also illegal for a civilian to dispatch the deer in any manner. This is because they have had incidents where guys who after having shot a deer illegally, claimed that it was a road kill. Dumping the entrails or carcass in the woods of a legally taken deer is not a problem as long as it is not dumped on state land or where it could affect a water course.

My son, who works for the DEC, checked with an Encon officer out of Region 3 where he works and was told the following: putting a deer out of its misery on the side of the road after being hit would violate the letter of the law, but not the spirit of the law. They say that in 99.9% of the time you would not have a problem if an Environmental Conservation Officer showed up, but might, if a State Trooper showed up since they might not understand. (This comment might be a result of a tension between wardens and troopers.) You also need to be sure you do not shoot from the road or across the road and are not within 500 feet of a dwelling. 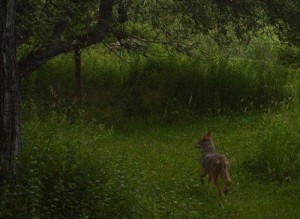 A coyote is caught by the new trail cam

A very interesting article in the latest issue of Audubon magazine talked about how researchers have observed some western coyotes actually working alongside badgers when seeking prey. “The badger will reject a coyote’s invitation to romp but may allow it to lie down beside it and even make contact. At the approach of a badger, a coyote will often wag its tail and roll on its back in delight”. I am doubtful that we will see anything like this relationship between our coyotes and black bears!

Enjoy the natural world and never forget that we are defined not only by what we create, but what we refuse to destroy.  ~