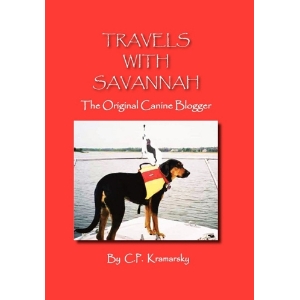 Dating back to ancient Greece and Rome, the term “dog days” usually refers to hot, sultry August weather and a time of lethargy when nobody really wants to move around. But contrary to this popular belief, we have a whole new meaning in this entertaining tail (pun intended) experienced by a dog and told by a dog purported to be (in the writer’s estimation) the “Original Canine Blogger”. Savannah, a large black and tan female of mixed breed, never lets the weather get her down but eagerly leaps aboard the Lazy K and later onto the larger Godspeed, two motorized boats her owners take on wonderful aquatic adventures. As she travels, Savannah sends emails to her friends and relatives which, all put together, became this memoir.

Since Savannah never learned how to handle a boat, she lazed around on board wearing her special life jacket, doing a good imitation of dog days, but mostly romping around enjoying new people and places and foods at the various marinas where her Mom and Dad (also known as the Captain and the Admiral) tied up. Along with them she witnessed glorious sunrises, manatees, porpoises, fabulous scenery, and once a tornado.

On the first trip from Annapolis to Miami, Savannah gained her sea legs and got to see wonderful places and scenic Southern towns along the way, not least of all Beaufort, N.C., an extremely charming town on the water that I wouldn’t mind living in. Other ports of call included Charleston and Jekyll Island and on other trips: Martha’s Vineyard; Williamsburg, Virginia; Stuart, Florida (where they witnessed a space shuttle landing) and later, the Bahamas and Abacos where the Captain and Admiral snorkeled among exotic fish and reefs.  They also did the Great Loop from Baltimore north to the Hudson to the Erie Canal, the Thousand Islands and on and on through Lake Michigan, the Illinois River, the Mississippi, the Ohio, and ending up eventually in Mobile.

Along with the good times, Savannah learned to take things in her stride (like landing in the water once as she tried to leap from the boat to the dock) as did her folks who had to deal with breakdowns, engine troubles, electronic conk-outs, storms, sand bars, and heeling over just short of falling into the water.

At some point her folks bought a large RV, and so Savannah experienced touring around on land as well, especially in the Catskills, and along with her boating journeys she was more well-traveled than many people I know. Savannah the dog had truly experienced a happy dog’s life of joy, love, and excitement, but many dogs are abused or abandoned. If they are fortunate enough, they get fostered or adopted from shelters such as Heart of the Catskills Humane Society in Delhi.

Ms Kramarsky, a Delhi resident, has written and published this true story of much of Savannah’s life. In the hopes of giving other dogs the opportunities of good homes and good lives, she is donating the entire proceeds of this book to the Heart of the Catskills shelter. The book can be purchased at the shelter in Delhi, the shelter’s thrift shop, Gifts from the Heart, on Main Street, Andes, and on amazon.com and Xlibris.com for $15.00. If you like dogs and/or boats, you will definitely like Savannah’s adventures on the water. Out of her 20 rules to live by her second one is “Never pass up the opportunity to go for a joyride” and she certainly didn’t.

And neither should you. ~