BARBARA OLIVER COLE: “I lived in the best of times” 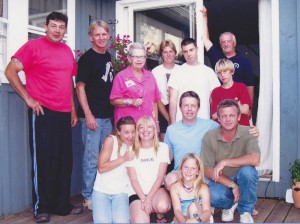 Barbara Cole is to so many the welcoming face of “downtown” Andes. For years she expanded her job in housekeeping at the Andes Motel to a hospitality committee of one as she engaged with people visiting family and friends or testing the waters of our town as a place to possibly settle in. Now, as always, you see her on her daily walks along Main Street, often to the library where this avid reader continues her weekly book borrowing. Or maybe stopping to chat with friends, old and new. Or in one of the shops which she loves to explore. Paisley’s knows Barb will visit virtually every Thursday to shop and exchange news. Her eagle eye immediately detects new merchandise on display.

Barb, my beacon for seeing the glass half full, making the best of any situation and engaging life with enthusiasm, agreed to be interviewed if she could focus on her memories of Andes rather than on herself.

I greet her on her shaded back patio reading one of her library books. The house she and Bob live in now is the same house she grew up in, the farmhouse of the dairy farm and feed store operation run by her parents, Claude and Hazel Oliver. The Lee house (behind the Slow Down Café building which then housed the telephone company) was a tenant cottage, and the whole hill was browsed by the 3,000 turkeys they raised and shipped.

Her mother, trained as a teacher, kept the books for the store and farm, and enjoyed bridge parties and other social activities that living in a village afforded. (Widowed young, and living to 85, Hazel spent an enjoyable 20 years as a housemother at Hartwick College.) 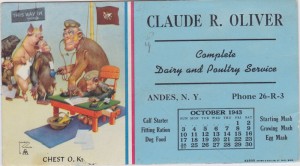 Barb recounts how everyone who lived in Andes worked here or nearby, perhaps on one of the 10 farms, at the creamery, in one of the 3 feed stores (Liddle Brothers and Deckers being the other two) or on the Gerry Estate. Most of the schoolteachers did, too. There was a dentist, a doctor, 2 veterinarians and a lawyer in town. Jack Gladstone’s, one of the 3 gas stations, (where George Ballantine lived until recently) was a popular hangout. Ada and Louie had a soda fountain where Woody’s is now. Everyone did all their food shopping in one of the 3 grocery stores in town. Barb tells of people from the countryside and Shavertown coming in on Saturday evenings to shop for groceries and then visit with friends on their front porches. If you are imagining neighbors in their wicker rockers, partaking in leisurely conversation over a pitcher of lemonade, that is the way it really was, she says.

Barb may not have had regular farm chores, but along with her brother (who now lives in Oregon) and the hired men, she worked in the hayfields, turning the hay with huge pitchforks, beginning on the 4th of July.

She has fond memories of her school years — she graduated from ACS in 1950 with a class of 19. She remembers going to the movies with a carload of friends in Margaretville, and afterwards to Christians’ Drugstore for soda, as well as to dances at the Andes Legion Hall.

On graduation, though she was accepted at the college at Geneseo, Barb decided to enroll in the Grace Downs Air Career School on 5th Avenue and 53rd Street for their 3 month program in New York City. She never took to the air, instead taking employment for Shell Oil for 2 years, enjoying living in Manhattan, delving into all the stores, including Saks and Lord & Taylor. She was called back to Andes when her father needed her help