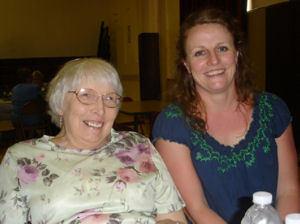 Member from most recent class: Wendy Gladstone Cooley class of 1991 with her Grandmother Marie Gladstone

The Andes Central School alumni association gathered on May 29 at the school gymnasium for their annual dinner and meeting. The 100 members and guests were welcomed by Superintendent Dr. Chakar and enjoyed a meal catered by “My Hero” of Delhi. The program featured the eight members of the class of 1961, who were celebrating the 50th anniversary of their graduation. Each talked about some experiences during and since leaving school.

Pastor Gerald Norris led a short memorial service for those graduates who died during the past year.

The officers elected for next year are:  Russ Estus and Herb Grommeck, class of 1955 – Co-Presidents; Gale Shaver, class of 1968 – Secretary; and Marie Gladstone, class of 1948 – Treasurer. 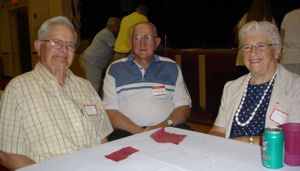 The class of 1941 celebrated 70 years since their graduation from Andes Central School. Above: Class of 1941 members Robert Reynolds, Stanley Dibble, and Ethel Bye Reynolds.Member from earliest class: Millie Johns, class of 1936