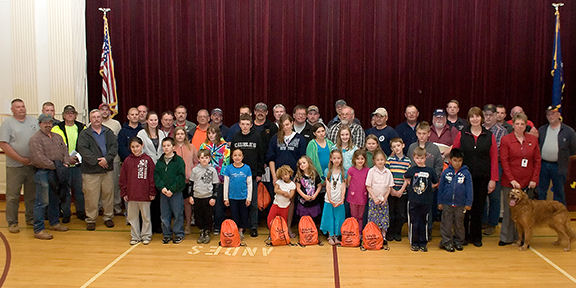 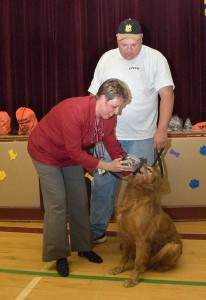 Dwayne and Jennifer Finkle with their Golden Retriever, Red, demonstrate use of the mask

On Wednesday, May 18, 2011 the students from the Andes Central School CROP Program entertained VIP fire chiefs from the 30 Delaware County Fire Departments and the Delaware County EMS Coordinator Richard Bell. The celebration with students, parents, friends and fire chiefs was a culminating event for a service-learning project that the CROP students have been working on since November.

Over $2000 was raised to purchase special Pet Oxygen Masks to be used on animals that are exposed to smoke during house fires. The campaign was launched with a $500 “Learn and Serve America” grant from the DCMO BOCES. Matching grants from the O’Connor Foundation and the German American Club of the Northern Catskills were acquired. The 40 CROP students raised the additional money by selling dog treats, cards and containers of snack mix during the holidays and collecting donations.

What began, as a modest project to equip the fire departments from Andes, Bovina, Delhi and Margaretville with a kit from Wag ‘N Enterprises quickly became something much larger in scale. With the $2000+ dollars, the Andes CROP Program was able to purchase kits for every fire department in Delaware County plus 2 additional kits for the Delaware County Emergency Response Trailer.