In response to Buffy Calvert’s letter in the April issue: 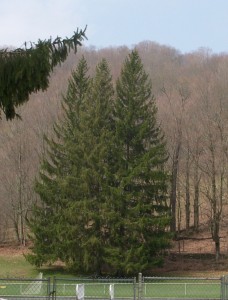 In the late summer – early fall, last year, I became alarmed to see many fallen current growth tips of the (maybe 150 year old) Norway Spruce in my back yard. By October there was a thick carpet of the green spruce tips under the wonderful space that is made by the spreading branches of the tree. I love this tree, and I was afraid I would lose it! This would completely change the character of my outdoor space.

So-o, by way of Jack McShane, I was put in contact with Ryan Chirpani of the Catskill Forest Association. Ryan was kind enough to come over to my house, and consult with me about my tree.

He soon found an odd little pineapple-shaped growth, about the size of a fingernail, on a low hanging branch which he called a Gall. He cut it off and took it back to his office. He soon called me and said that the damage was being caused by the EASTERN SPRUCE GALL ADELGID. He said that the insects (like aphids) were gone, but they would probably come back. He also said that the tree would probably not be killed, but with recurrent infestations the branches could become more sparse and scraggly (take a look at the old Spruce tree in front of the former Martha Campbell house, across the street from me).

To find out more, I googled “Norway Spruce- Spruce Gall- Adelgid, and found a lot more information, like the following:

“The galls formed by this pest are short, pineapple-shaped growths. They are usually less than 25 mm long, green at first, but turn brown when they open and the adults emerge. Eggs are covered with white waxy filaments.

“This pest overwinters on spruce as female nymphs in bark crevices on the current year’s twigs, especially at the bases of buds. In the spring they resume feeding and mature into adults. Females usually start laying eggs about the time buds start to open…Young nymphs hatch from eggs in 7-10 days and crawl into the bud and among the bud scales. Once in the bud, they begin feeding on the new tissue. Feeding stimulates most plant cells to produce an individual gall where each needle should develop. The result is a series of affected needles, which collectively grow into a stunted pineapple-shaped gall…They remain there until the galls are fully developed, begin to turn brown, and open from late July through October. During this period of time, mature winged individuals fly from galls to lay eggs on host needles. Eggs hatch into young nymphs that overwinter.

“Feeding by this species stimulates the formation of a gall at the base of the current year’s growth. Infested trees are seldom killed, but the aesthetics of an infested tree may be greatly reduced.

“Pruning and destroying green-colored galls during June or July before they open, and therefore, before adults emerge, is practical for light infestations on a few small trees.”

These Norway Spruce trees are an important part of Andes. They make an ambience of an ancient forest, noble greenness where they have matured. I strongly hope that healthy mature specimens will not be cut down, and where they have been spaced too closely, that only the too crowded intermediate trees be culled to widen the spacing, leaving the aesthetic of the row along walkways, fields, and driveways. And please clean up the debris of cut trees…and perhaps plant new young Norway Spruce, to keep that noble ambience in Andes. I miss the ones that have been cut unnecessarily. They were so important to the streetscape.~