Observing the well-trodden deer trails in the woods with all the tracks going in the same direction, from the lower sections of the hollow to the northern and higher elevations depicting a mass migration from winter seclusion in the “deer yards”’ to the summer ranges, I think of calling it the “march of the ungulates”. One day I counted eighteen in a single file through the woods, led, of course, by a large matriarch. Some upon witnessing such a scene might mistakenly assume that that the deer population was extremely high. In reality these deer will spread themselves over a large landmass to the north. I do hope some hang around.

The bluebirds are back as are their nemeses, the tree swallows. The boxes have been cleaned out and repaired where necessary. Spring cleaning of bluebird and wood duck boxes is an interesting and educational adventure for the intrepid naturalist. You never know exactly what lies within the box containing nesting material from the previous year and creatures both alive and dead. As for those that are alive, I follow the rule to knock first before opening so as to avoid the occasional winter dweller leaping into my face. These critters include mice and flying squirrels.

The old nesting material tells the tale of the previous year’s inhabitants and in some cases multiple inhabitants, their successes and failures and even in some cases their remains. If the old nest was grass with minimal defecations, the inhabitants were bluebirds. If it was finished with feathers and much defecation the tree swallows abided. If a neat layer of green moss, then more than likely the chickadees made residence; whereas if a box is jammed full of small twigs and thorns, the wrens took over. Interestingly, there is an occasional box that housed a couple of species. The evidence: one nest on top of another, usually the tree swallows on top of the bluebirds. One box this year showed sign of the presence of four different species, from the bottom up: chickadee, bluebird, tree swallow and, finally, twig jamming by wrens. I wish I had taken a picture of it. Another box with a cache of acorns all uneaten and viable, probably gathered by a flying squirrel who, after all the effort, met his or her demise, evidenced by the fact that none were eaten. Usually their caches show only the chewed shells remaining. 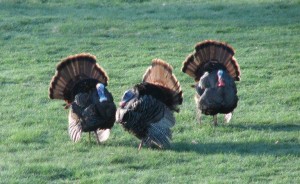 Back on the ponds are two pair of Canada geese and two pair of wood ducks. The question remains: will the woodies nest in the boxes this year? A number of mallards, a pair of common mergansers, and to my delight ”Prince Charming,” the drake cross between mallard and ruddy duck. Hen turkeys are busy foraging and totally ignoring the strutting toms as per usual. Welcome back to all. Happy breeding and successful family raising! The painted turtles are up and basking on logs in the lower pond. Only “Big Momma” is nervy enough to remain as I pass by on the tractor.

Some other observations by my neighbors and friends in Andes: Joe Eisele, who runs a beef farm at the juncture of State Road and the Tremperskill Road, has observed bald eagles feasting on the afterbirths of his birthing cows. Luckily there have not been any attacks on the newborn calves. Eddie Piervincenzi reported that she was watching a woodchuck resting on a stone wall when a young one popped out a couple of times from under her furred hip. Eventually Momma disappeared down the wall and into her den under Eddie’s old chicken coop. Doris Hartung called asking if I could identify a mystery flock of large black birds with wingspans of up to five feet that were hovering over her garage. It sounded like turkey vultures, but why the interest in the space above the garage? In further conversation, Doris mentioned that some unknown animal had apparently died somewhere in the garage and that the building had a vent up through the roof confirming in my mind that, indeed, the birds were turkey vultures as they are carrion eaters and with their strong olfactory senses are attracted to the smell of decaying flesh. I have read that they can detect food on air currents from as far as a mile away.

Anyone out there having a recent and interesting observation, anecdote, or question about our wild neighbors, give me a call at 845-676-3534 or email jackandnancy@catskill.net.

Having just attended a performance of Pepacton, a play about the Catskill Mountain naturalist John Burroughs at the Open Eye Theatre in Margaretville, I was reminded of the importance of our youth and their interaction with nature. Some kids seem to have an intrinsic interest in all things furry, feathered and scaly, even creepy and crawly; they delight in their capture and inspection. Some of these kids may very well be our next generation of natural world scientists, so I implore you, never respond with an “eek” or “yuk” when a child proudly displays that slimy salamander she just caught in your pond. Instead, show interest and help her identify the species, understand its life stages and of course the importance of returning it to the pond. Encourage kids that have no interest in the ball game to pursue their joy of the forest and what lies within. I was lucky to be one of those kids.

Many of our returning bobolinks will have flown more than 6,800 miles from their winter respite in Brazil or Argentina. Many of our human snowbirds will be driving up from Florida. ~