Remember that postcard announcing a Public Hearing on Tuesday, March 8th relative to our Water Treatment Plant you received in the mail (if you are a resident of the Sewer District)? Buffy Calvert attended and learned that the hearing was a requirement for an application for a Small Cities grant, which had been determined as vital for securing funds that can be applied toward fixing the numerous, long-standing problems with the system (see accompanying box for a history and summary of the multiple processing difficulties).

Buffy learned that after a complete failure in the treatment plant on October 1st of 2010, it became clear that major remediation was needed to correct the deficiencies. Although the DEP had signed off on the plant from the beginning, problems began the first year. (The engineering firm that designed the system, LMS, has been sued by various municipalities for design flaws in similar systems and is now out of business.) Attempts to obtain redress through the DEP had not been successful. DEC found errors when they performed a Comprehensive Evaluation two years ago. The maintenance staff, it was learned, had been making do with a kind of band-aid approach.

The Governor’s Office for Small Cities’ grant requires a high percentage of medium and low income residents. You as a resident of the sewer district will receive a survey in the mail which will ask for annual income. Keep in mind that it is important that you and any tenants fill it out and return it. The surveys are anonymous, being recorded by a number. A certain percentage of the population must reply and a certain percentage of their incomes must fit the guidelines for the award to be granted.

Marge Merzig of Keough Consulting and Supervisor Marty Donnelly went to Albany the day before the hearing to further investigate the details of applying for this grant. Supervisor Donnelly stressed in a phone conversation that negotiations are going well with the DEP. We are confident that he is advocating energetically and skillfully on behalf of our community to obtain reimbursement for what will be very costly repair and reconfiguration of the system. He also emphasized the importance of turning in the surveys so that the Town can obtain grant monies so as to minimize the financial burden on the sewer district.~ 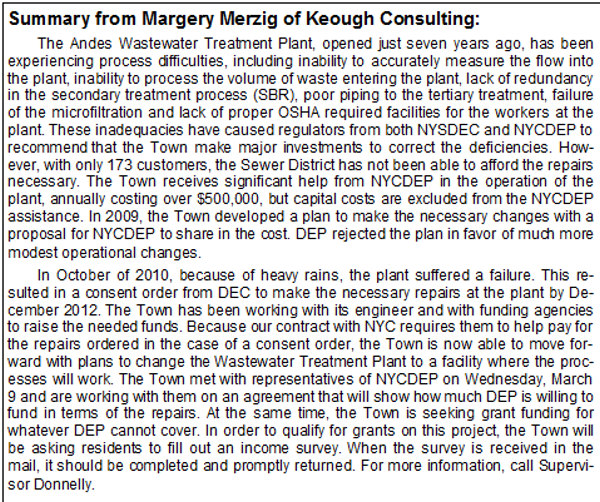