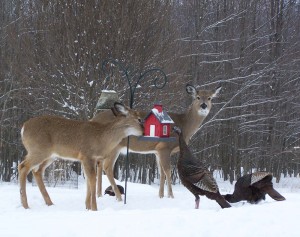 Wild turkeys and deer dine at the bird feeder; photo by Doris Hartung

Winter seems like it just does not want to let go, but the wild critters seem to struggle on. There has been great diversity at the feeder and beyond. As of this writing there is no sign yet of the red-winged blackbirds which I consider the true harbingers of spring around here.  One snowy day there was a male cardinal, a welcome guest. The snow has not deterred a very intrepid chipmunk that has been out and about no matter how frigid the temperature, filling his cheek pouches with seed and then scampering back to the rock wall where I know there is at least one woodchuck snoozing away. I can imagine him deep in the rock fortress snuggling against this heap of slow-breathing free heat. The cottontail rabbit has continued to avoid predation even though he makes daylight forages below the feeder, occasionally making audacious leaps at annoying gray squirrels. A very white skunk made an unusual midday foray from his lair under a pile of boards in the pole barn. He could not cross the flooding stream, so instead came right up to the house and by the time I got my camera he had disappeared. Not wanting to get sprayed, I avoided sharp corners.  Result: no shot. On a very unusual day (it was sunny), eight mature tom turkeys with long beards arrived, cleaned up around the feeder, then moved off easily on the crusted snow and have not been seen since. With luck they will be back in May so they can make a fool of me, as they did last year, as I try to entice one of them within shotgun range.

Bulletin: A red winged blackbird has appeared at the feeder March 9th. This writing takes place over a number of days and it is now March 10 and I just got an email from a friend on the outskirts of Margaretville reporting he had a red-winged at his feeder also on March 9th. Spring is here no matter what. Another good thing:  the eagles on Route 30 at the Dingle Hill bend seem to be actively nesting. The time is now for the female to drop her eggs, usually two. Good luck, guys. 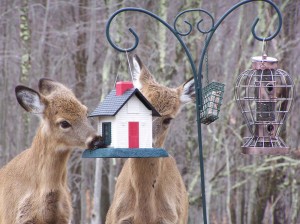 Young deer fill themselves from a bird feeder; photo by Doris Hartung

More on Route 30: my wife and I observed a bobcat cross the road to the reservoir side and leap over the guard rail that was heaped with snow. Coincidently I have been reading about bobcats in Northern Woodlands magazine entitled “Woods Ghost Bobcats on a Comeback”. The article details how bobcats were almost exterminated through excessive hunting and trapping and having a state-paid bounty on them. Although the bounties were ended in New York State in 1971, they are still considered a furbearer with a legal trapping season. Bobcats have fairly small litters, from one to three kittens, once per year in the spring. Large males can reach 40 pounds and tend to be loners; females average twenty pounds when fully grown and care for their young on their own. They are strictly carnivorous, not like their competitor the coyote which is omnivorous and will eat almost anything. I believe that our bobcat population is doing well as I have had many sightings over the years; the best one was a female leading her three cubs across my lower field which held round bales of recently cut hay.  One of the cubs leaped up on a bale and held off the two siblings by swatting at them. Mom, seemingly a little annoyed, paid no attention. 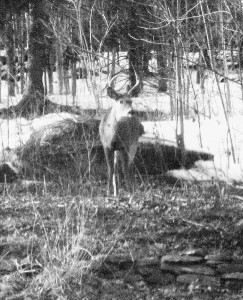 On March 3, Jane Berghammer was able to capture this late antler-retaining 4-point buck with her camera

Robby Laing reported that he observed a possum up in a thorn apple tree during daylight hours out in his backyard, and thought it strange as critters generally avoid these trees because of the thorns. It remained positioned for a long time, and when Robby went to investigate, sure enough its leg was impaled on a large thorn. A pair of loppers got poss and the branch down where the thorn was removed and poss moved on. Robby got a grin from poss as it limped off, which is something that unhappy possums do. It was not a “Thank you” grin.

Be aware mountain lion sighters: the United States Fish and Wildlife Service has sent out a notice that it concluded that the big cat (the Eastern Mountain Lion) is extinct and was removed from its list of the endangered species.. I surmise they will be looking into the reported sightings of Bigfoot next and I presume they will consider it also extinct. Check out the great shot (on Page 3) taken by Jane Berghammer of the late antler-retaining four point buck mentioned last month.

March 12th bulletin: the rabbit is dead, only bits of fur and entrails below the feeder. The question arises: was it a coyote or a bobcat?  The melting snow gave no hint. Some good news – the eight tom turkeys are back.

March 13th bulletin: a grackle at the feeder and a zillion robins in the open upper field.

“We have to acknowledge that there is a world of living things around us deserving our attention and respect”.~