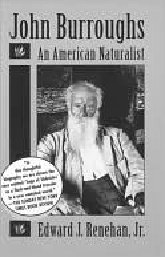 I’ll start off with total disclosure:  I am a besotted fan of John Burroughs (1837-1921), a Roxbury native whose roots informed his nature writing. If he were alive, I and a few similarly-minded friends might all be groupies, at least in the manner that environmental adherents and literary fans of a certain age can be groupies.  Still, despite having read and deeply enjoyed a couple of his books and both the narrative and photographs of Edward Kanze’s 1993 book. The World of John Burroughs, visits to the kiosks and hills of Woodchuck Lodge and a hike to pay homage at Slabsides, I had huge gaps of knowledge. Renehan’s biography, published in 1992, thoroughly filled those gaps while providing enjoyable reading. And it did so much more:  it brought Burroughs alive through a detailed and readable telling of his entire life, largely laudatory as it recounts his influence and beloved status through quotations from correspondence — but not hesitating to cite his “warts”. In contrast, his biography by Clara Barrus, his editor, companion and physician was, even to Burroughs’ mind, too adulatory. [As a side note, Barrus was the great aunt of Jody Primoff, a poet and painter of nature whose family has a home in Roxbury, and whose show of collages reflecting the Barrus/Burroughs connection was presented at the Erpf Center in August, 2009.] Incidentally, the story of the Burroughs/Barrus relationship offers its own fertile drama, in my opinion one worthy of the silver screen.

Burroughs was an extremely learned rustic who had spent time in cities (he worked for 10 years in Washington, D.C.) but believed they had an unhealthy effect on the human spirit. “Truly, man made the city,” he famously wrote, “and after he became sufficiently civilized, not afraid of solitude, and knew on what terms to live with nature, God promoted him to life in the country.” Burroughs was a kind of pantheist who found a pervasive spirit in all of nature.  He often referred to the “Over-Soul,” a concept espoused by Ralph Waldo Emerson, his literary mentor.

He immersed himself in the writings of Emerson, along with a full range of history, philosophy and literature.  When he met Walt Whitman, whom he described as giving the impression of an incredibly well-spoken lumberjack, he was ready to take on this real life mentor. From Whitman he learned to insert his personal experience into his writing, including the day-to-day of the farming life, infusing it with an irresistible humanity.

Burroughs, who idolized Whitman, wrote the poet’s first biography. He was intimate as well with Theodore Roosevelt, E. H. Harriman, Andrew Carnegie, Thomas Edison, Henry Ford, and John Muir. He hiked and camped with all of them.  Burroughs had at first heartily disdained the new automobile, calling it a “demon on wheels”.  But he learned to enjoy the Model T that Ford gave him, often driving at unsafe speeds.  Ford’s publicity department made newsreels of some of their camping adventures.  “Millions of Dollars Worth of Brains Off on Vacation,” read the heading of one story.

Burrough’s long marriage to Ursula North, whom he courted when a young schoolteacher in High Falls, walking miles to her home in Olive, was clearly a piteous misfit of personalities.  Even when he finally achieved financial and critical success, and later when national fame and distinction were his, she continued to demean his “scribbling”.  He, in turn, was constantly annoyed by her fixation on housecleaning and cleanliness, and her lack of appreciation of his pursuits.  Whitman, whose socks Ursula darned, would admonish Burroughs for his failure to give his wife her due.  What they shared was a devotion to Julian, their only child, whom Burroughs doted on. Father and son shared hunting, fishing, nature walks, work in the vineyard and love of literature.  There is a fascinating “backstory” regarding Julian’s birth, which I won’t tell here.  The youth constantly strove to act as a peacemaker between his contentious parents.  Possibly to the detriment of embarking on paths to success in the wider world, Julian returned after Harvard to be near his folks at Riverby in West Park on the Hudson. Julian was in some manner able to fulfill himself, designing and constructing a house, writing magazine articles, managing the vineyards, devoting himself to his family of three children.

We follow Burroughs as he travels between Riverby and his nearby writing retreat, Slabsides, and back to Woodchuck Lodge, on the family’s Home Farm.  His very full life, his stature as a national figure in his own day as he offered through personal example and the written word a vision of a rural life consciously and attentively lived — a counter-balance to the popular pursuit of money and material goods during the Gilded Age of the robber barons —  and his contemporary relevance to the conservation and ecology movements: all are reflected in rich detail in Renehan’s book. This and a collection of 24 of Burrough’s beautiful writings, replete with references to birds, plants and places we know well, are available at our library.  Others are obtainable through the Four County Library System.  Do burrow in!~