On Saturday,  January 8th  I received a phone call from Mary Davis, who lives at the Triangle. She had been walking her dog in Ballantine Park when she saw a deer with a broken leg struggling on the opposite bank of the Tremperskill. When she arrived home she gave me a call to ask what might be done and I assured her that it would be taken care of. I called our local Environmental Conservation Officer, Vern Bauer, who was not in. I was referred to the dispatcher in Albany who gave me the name of an officer out of Delhi, one George Wolver, who when called answered immediately and said that he would respond forthwith

I raced to the scene and arriving with binoculars, spotted the deer and backed off so as not to alarm it any further. Officer Wolver arrived shortly thereafter and we discussed how to handle it. As the deer was obviously mortally wounded it was decided that it had to be put down. Officer Wolver fired three quick shots putting the animal out of its misery. The lesson here is that if you hit a deer, or any animal for that matter,  check to see if the animal is alive and needs to be put down.  Thank you for the call, Mary. And thank you Officer Wolver for your professionalism.

Bustling Before The Storm 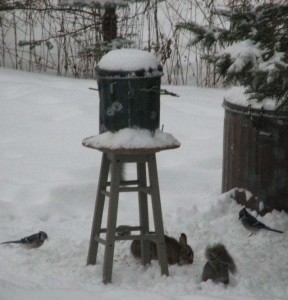 There has been plenty of action here at the Bussey Hollow wildlife feeder, which is actually supposed to be a bird feeder. This feeder is truly a wildlife feeder as it attracts far more than the usual chickadees, tufted titmice and the gang of eleven bluejays. The gray and red squirrels, which many ardent birders try everything under the sun or snow to deter, are welcome here as I am intrigued by their antics and their apparent dislike of each other. Who the big guy on the block  is, is not always determined by the size of the critter, but more by the feistiness and gymnastic skills of each combatant. The little red guys often outdo the larger gray guys. 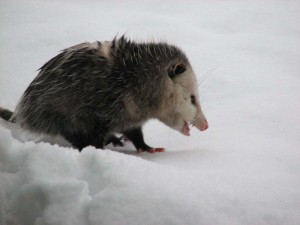 Opposum shows up for a meal

So who else has made visitations? Tracks in the snow tell me that many deer and at least one raccoon have made nocturnal visits. Daytime visits by an opossum and a cottontail rabbit surprised me as these guys are usually pretty nocturnal in their wanderings. I do have a theory, and it is only a theory, and it is this: some nocturnal critters seem to have a sense of impending bad weather and forage into the daylight hours in order to stock up prior to days when they will have difficulty making their way to their food sources. The appearance of both the opossum and the rabbit were on days just prior to heavy snow days. Deer are known to be active before storms, and then will hunker down for whole days during a deep snowstorm, apparently to conserve energy, and resume their movements thereafter. My tracking experience has shown that even our predators, the coyotes and bobcats, do the same. Wildlife biologists with the Department of Environmental Conservation report that wild turkeys will remain roosted in trees for up to two weeks when the snow is so deep that they would be unable to navigate on the ground. It is amazing how our wildlife can survive for so long without eating.

This from that great old philosopher Philippa Foot: “Nature is composed of objective facts that we can verify through science; values are mere attitudes in our heads that we project onto the world as we like” ~.