WHO AND WHAT’S NEW IN ANDES? DAVID BURRIS & ARGYLE FARMS 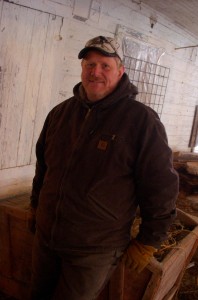 What’s happening at the old Jaakson farm on the Tremperskill Road? You must have noticed 4½ miles of shiny new fence looping over the hills, gates set here and there. Suddenly last summer 75 Boer goats appeared. (So suddenly rumors spread that they had been dropped by helicopter!) The goats retreated to an upland pasture out of sight.

Cheviot sheep dotted the fields, a breed from the Scottish Highlands well adapted to the icy winds now battering us. After the sheep and goats, Belted Galloway beef cattle, another Highland breed familiar to us from Jack Burns’ farm in Bovina (or the menu at the Andes Hotel) arrived. In fact, they were bought from Jack Burns himself. All cows, except for McShane, the solitary bull. Bovina-bred White-faced Herefords joined them.

What’s going on here? Your reporter winkled the name and phone number of the manager from neighbors, Harvey and Judy Morse. “A nice fellow,” they assured me.

And he is. David R. Burris, the Farm Operations Manager, got permission from his employers, Jean-Louis and Zee Danis, partners in Argyle Farms & Properties, LLC., to talk to the Gazette. Dave thoughtfully arranged the meeting after the goats were snug in the barn while the sheep shoved in and out of an open door to their paddock. 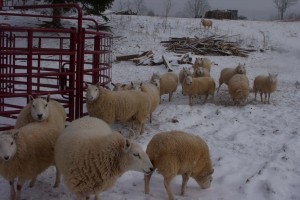 Chiots wearing their sheepskin “coats” in the snow

The goats are a South African breed, hence their preference for the shelter of the barn.  They also sport one male, a handsome billy named Fireball, boasting a harem of 74 nannies. Many of the females are now bred, expected to start kidding in January. The aim is to have both the goat and sheep herds number 150. Dave keeps meticulous records of breeding, kidding, lambing and calving for each animal by name so that the blood lines can be kept clear. Other males will be used to avoid over in-breeding.

How did this hard-working man from the State of Delaware find himself in our own Delaware County?  He grew up on a 1,000-acre peas, beans and sweet corn farm raising produce for Campbell Soup. At 27 he bought his own farm and contracted with Perdue to raise oven-stuffer chickens. He bought another 750 acres for 275 meat goats. 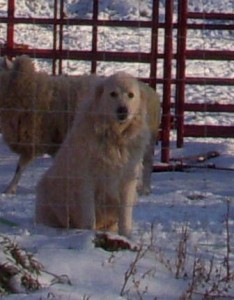 A year and a half ago, not yet 50, Dave realized that his adult children would want to have their own places and sold both farms. His son, 24, majored in sports management; his daughter, 20, studies agriculture. Through a head-hunter in Nebraska, Dave contacted Jean-Louis and Zee Danis, came to Andes for a weekend with them, and, last June, moved into an apartment in the old Balcom farmhouse next door to Argyle Farm. His wife, Transportation Analyst for the State of Delaware, still lives down there. When the lovely Jaakson farmhouse is renovated they will move in. Dave can hardly wait to cultivate Enna Jaakson’s famous vegetable garden out back.

Dave put together the farm plan and tags and tattoos each animal. For security, he chose two assistants: Cali and Jacob, big, white, fiercely protective guard dogs of a rare Italian breed. They resemble Great Pyrenees. They bond with their sheep and goats and keep all predators at bay. If a coyote or even a white-tailed deer approaches, Cali will herd the flock away from danger while Jacob menaces the intruder. At David’s reassuring word, they allowed me to enter the barn.

Last summer Dave round-baled 350 bales of hay from the former Campbell farm where the Danises live. They plan to expand the cattle herd next year and are doing extensive work on the barn to stabilize it and suit it to its new use. Besides creating fine herds and selling meat, they are considering weaving the sheep’s wool into Argyle Farm blankets.

It is good to see land used and to have a new neighbor who raises animals because he loves the work. When you see Dave Burris in town, welcome him. He’ll be happy to show you the farm. ~