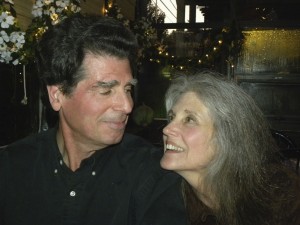 Roger Bobley has retired as facilitator of the Andes Roundtable, a position he’s held for over a decade.

He and Carol, his lovely wife, have been coming faithfully every Wednesday, in time to prepare the coffee and refreshments. They never know whether  five or fifty people will show up at 7 pm for an evening that he has planned and that is sure to be interesting, with friends who over the years have become like family.

Where does he find the talented artists, writers, academicians, musicologists, playwrights, poets, scientists and other fascinating people, who are willing to talk to us about whatever it is that they are most passionate about, merely for the pleasure that they get and we receive from doing it? They are never paid, and aside from the $2 fee charged per person to cover the use of the utilities and refreshments at the Hunting Tavern, there is no charge for what is always an enlightening and thought-provoking evening.

We come to enjoy the evening’s entertainment and discussions, as well as the feeling of community, and we leave Roger and Carol to clean up after us, emptying the coffeemakers, putting away the leftover refreshments and seeing that the room is left in order, never asking for help and not getting very much!

In preparation for these evenings, Roger must inform the members, keep the website up to date and come up with the humorous anecdotes to add to his weekly messages.  The website he designed,  (www.andesroundtable.com), contains the history of the Roundtable, photos taken by Roger of each participant and many other interesting facts.

How are we so lucky to have had the pleasure of this wonderful and multi-talented couple amongst us? I asked Roger for a little background and found out that he and Carol met on a blind date, arranged through Roger’s mother and grandmother, who cajoled him into calling the daughter of his grandmother’s doctor. That was in 1963. Several days later, dressed in a suit and tie, he met Carol at her parent’s apartment. Miraculously, it was “love at first sight” and they’ve been married for 45 years so far!

They have three children. Josh, who speaks fluent Mandarin and helps Chinese and American companies do business together, has been living with Roger and Carol in Margaretville for the last three years. Darren, a senior vice-president at Oppenheimer & Co., lives in The Woodlands, Texas, with his wife, Nickole and sons, Max (4½) and Oscar (1½ ). Lila, an event planner at the George Washington Manor in Roslyn Long Island, lives in Glen Cove.

In 1994, Roger retired as a book publisher and Carol was about to retire from her career as a junior high school English teacher. They sold their house in Old Brookville, Long Island, and began their search for a retirement home. They saw an ad for a farmhouse in Stamford which, they discovered on a map, was not far from Bovina Center, where, many years before, they had stayed at the Mountain Brook Chalet. They remembered it as being a magnificent area that looked much like Switzerland. After putting a deposit down on the Stamford farmhouse, but before closing on it, they saw another house, listed in the paper as a “dacha” on Margaretville Mountain Road, overlooking the New Kingston Valley. Well, that turned out to be another “love at first sight” event in their lives. They immediately bought the “dacha” instead of the Stamford farmhouse. They moved to Margaretville in 1995 but Carol, after experiencing her first winter here, decided not to retire. She continued teaching for the next ten years, joining Roger on weekends and every summer.

Roger and Carol have enriched our lives with the richness of theirs. They’ve both become our friends. They will continue to enjoy their beautiful home, their family and their many interests. We’d like to see more of Roger’s DVDs like “Marvelous Margaretville” and “Catskill Mountain Locals”, art work including those clever caricatures, writing and photography and have his and Carol’s company at future meetings. Fortunately, several current members, including Jack McShane, Bill Piervincenzi, Sharon Ruetenik and Josh Bobley, have volunteered to take over Roger’s duties, thereby stretching the life of the Andes Roundtable into the future.  ~